Steve Macone is a writer and standup comedian living in Somerville. He attended Matignon High School and studied journalism at Boston University. His essays, reporting and humor writing have appeared in the New York Times, American Scholar, New Yorker, Boston Globe and The Onion, where he was a headline contributor for three years. As a comedian, he has twice been a finalist in the Boston Comedy Festival. 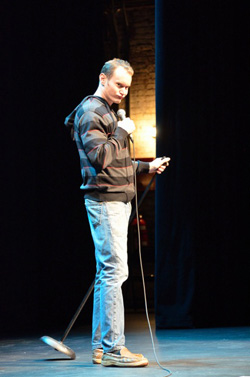 Are there some past projects you’d like to mention in more detail?     Is there anything new you’re working on, or an event that’s coming up?

WelI I host a standup show at Burren on Wednesdays at 10pm. It's kind of a well-kept secret, a low-key and free show but we get drop-in sets from some great comedy acts pretty regularly. I'm finishing up a handful of writing projects that will hopefully be out in the next few months. They are pretty weird, so that's exciting.

The 'why' of doing standup comedy is sort of obvious at first glance and insane if you stop to think about it. For one, making people laugh is the absolute best, so there's that. But as for why would anyone put up with a lifestyle of travel and rejection and hecklers in bars? I dunno, see part 1 I guess?

Can I answer both of these questions at the same time?  Both the standup comedy scene and the writing scene in Boston and Somerville are incredibly strong.To be so close to a place like Grub Street, where I have taught and have taken classes, is a tremendous help. There's really nothing like it in the country. And I've had great writing mentors, people like Michelle Seaton and Renata Adler I've been lucky enough to come to call friends, as well as the reporters Mitch Zuckoff, Robert Manoff and Lance Morrow early on while I was in school.
For standup, Boston and Somerville are both great. As a new comic in Boston you are absurdly close to great comedians. You're starting out and there are these masters like Kelly McFarland or Gary Gulman who drop into a club and do a set and you're just in awe. In Somerville, there are shows at places like the Armory, the Burren, the Davis Square Theater and there are a lot of comics who either live here now or who have passed through. Somerville also hosts the Boston Comedy Festival now, which is huge, a week-long series of shows with comics from around the country.

I will say, I think the role of the creative scene and the role of artists in Somerville has never been more important, since an artist is someone who does the hard work of taking in the world, which is weird and confusing, and making the world's problems pretty enough that people will look at them and think about them a little longer than they otherwise would have. I think we sometimes think of a local artist as some vaguely flower-child looking person who paints a mural on a wall beside a highway because the city told them to, or "let them." I'm guilty of slipping into this type of thinking this myself. But of course an artist does their physical work and so much more, or else their physical thing is just arts and crafts. The artist sees the big picture, questions why that wall and highway are going there in the first place and what it's going to do to the communities on each side, what the pros and cons are. An artist renders the complexity of the tradeoffs we make as a society a little more accessible to everyone. And right now, Somerville is making lots of little tradeoffs. The artist takes the things that seem too complex and makes them simple and, sometimes more importantly: takes the things that some would have us think are simple and shows their complexity.

So I think it's important to remember artists aren't these quirky oracle gnomes around a city that make it more pretty or kooky for the other people who live there: they aren't perennial flowers you plant on the medium strip of your SimCity, whose eccentricity you tolerate for a greater good we can't quite explain but pay lip service to. The reality is that artists are just people working really hard and trying to do what they love, which is to say: more or less like everyone else in that community. (Though, typically artists tend to dress either much worse or much better and also look somehow simultaneously like they haven't slept and like they just woke up---this is just one fun way you can try to spot an artist!)  So, yeah, when I hear that real-estate agent way of speaking, like, "Oh the city has tons of artists" to sell a place, as a means rather than an end, something inside me, and probably that city, dies. I think any city that lets anyone talk about its artists like they are walk-in closets won't have artists for very long.