Interview with Rebecca Kopycinski as told to Michael J. Epstein. 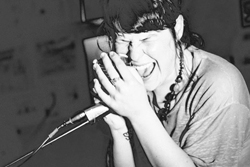 Are there some past projects you would like to mention in more detail?

This past winter, I staged my first multimedia character narrative, Connie. It premiered as part of Talk to Strangers, a co-LAB project presented by Liars and Believers. The performance was made up of five vignettes utilizing live music performance, projected video, and acting to tell the story of a woman and her relationships (both digital and analog) with herself and others. This type of writing and performing proved to be extremely gratifying. Individually, I feel the methods used (drama, video, music) have their own strengths, but also limitations. Combining those powers created a more robust vehicle for telling a story, one that I think was more effective for what I do than one method could have done on its own.

Whereas music has been a constant in my creative life, it’s been challenging to write new material since losing access to rehearsal space in February, shortly after Connie debuted. Thankfully, I’ve been getting my singing fix by way of joining another band, Bury Me Standing, this wild, gypsy folk metal band. We have a huge show at Berklee Performance Center on October 19 and have been gigging regularly since I joined this summer. Back in my personal creative world, I’ve been working on a new piece modeled after Connie. The last month has found me in a new rehearsal space, so I am again working out my ideas without pissing off the neighbors, and the narrative is starting to flesh itself out. To an extent, I feel like I’m starting from scratch. Even though I have Connie under my belt, I had the tech crew at Oberon and a cast of musicians at my disposal to help make it happen-- now it’s just me again. It’s a completely new type of performance. Will there by TVs? Projection? A computer and MIDI controller on stage? Perhaps a collaborator is in my future? There’s been quite a bit of experimentation going on as I work to reinvent my art. In a sense, I guess EVERYTHING is new, or at least it’s like cutting up a bunch of old clothes to make something new. It’s exciting, too. I think an artist has to be
constantly progressing, changing, pushing their own boundaries and limitations. Otherwise, it gets boring. 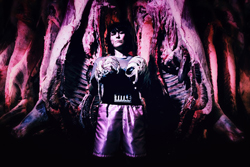 The introvert’s “why” is easy. I must. I have to. I’m not happy when I’m not creating. I like being with a concept, idea, song, or whatever, and suddenly the next thiiiing -- the next note, the next lyric, the next scene, the next vhs clip -- manifests. It’s a fun game, a fun puzzle. Something to do instead of Netflix and chill (though I need to remember to relax every once in a while). Plus, singing feels so good physically. Then there’s the extrovert’s “why.” That’s what I get when I take my creation out into the world for consumption. Sure, praise is great. Everyone loves to be told their shit doesn’t stink. What’s more fulfilling to me is when I can visit the commiseration station with someone because of what they took from my art. “UHHH, that thing you said in that song. I have ABSOLUTELY felt that way. I’m so glad it’s not just me.” Or perhaps, “Geez, dude. That totally made me laugh (or cry, or consider, or wretch).” Et cetera. I sink a lot of my emotion and, quite frankly, my dysfunctions, into my music and video and performances, but I also try to address crap that I think most people experience. My hope is that people can resonate with some of it and feel comforted in that we’re all just these skin sacks hurtling through space on a rock, but at least we’re all in it together, so it’s gonna be ok.

What inspired you to pursue the arts? What got you involved in doing what you do? Is there someone or something that was important in getting you on your way? (A big break you got, or a mentor who helped you, etc.) 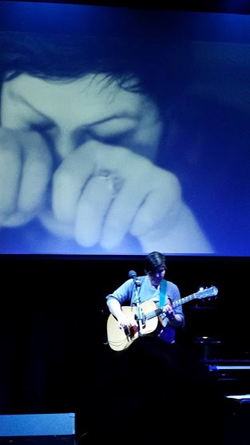 The decision to go into the arts was catalyzed by an absolute obsession with the band Blind Melon. Through listening to them ad nauseum for years, as well as Janis Joplin and others, I figured out I could sing. This was seventh grade. I went to college for classical vocal performance and started writing and gigging shortly after graduating. Until my experiences with Liars and Believers, Bury Me Standing, and collaboration on a TV wall project, I had always (and mostly still do) work alone. That isn’t to say I don’t receive all sorts of support from those around me. I wouldn’t say I’ve had a big break or a mentor, but a series of small victories, baby steps, that have brought me to where I am now. My parents are unflagging in their support, even when I come out with most ridiculous ideas: “I’m quitting my job, subletting my apartment, and driving across the country by myself for a while, ok?” or “Can I borrow your truck so I can move my 6-foot-by-6-foot TV wall to the Rose Kennedy Greenway?” I couldn’t have two more supportive parents. I’ve encountered a series of tiny “breaks” by way of meeting people who have proven key actors in getting me to where I am. For example, playing a show in Lowell with someone who said I might like his girlfriend’s music, then getting in touch with her and playing a gig at her artist co-op performance space, which led to going to the first brainstorming meeting for Liars and Believers, which led to me deciding to leave Vermont, then playing another show at said co-op that led to meeting another person who got me into the a/v installation stuff…. Just keeping myself open to meeting new people and casting a wide social net has led to so many opportunities. Maybe one day I’ll get a huge grant or have some other “huge break,” but right now, I’m loving where I am, I’m loving what I’m doing, I’m loving my city and the people in it. All is well.

I’m grateful that my creative life and professional life somewhat intersect. I recently cut the cord and am now supporting myself primarily through freelance video production and editing. For me, having a traditional office job has always been a struggle. I’m most productive at odd hours and am allergic to the 9-to-5 mold. I’m finding the freedom to budget my professional and creative time as I please, a small luxury that is truly priceless. Thankfully, the video work is intrinsically creative. Most of my clients are arts non-profits and most of the videos I produce are just another form of storytelling. Of course I make some money doing what I do creatively, but certainly not at a level that would allow me to make a living off of it. Success, to me, is measured more by the joy and contentment I can glean from the life I have built for myself and how I spend my time, less so by the amount in my bank account.

Moving from Burlington, VT to Somerville has been the greatest decision of my life. One reason is I am close to my wonderful, supportive family again (I am originally from Lowell, MA). Secondly, I have the occasion of being surrounded by innumerable creative people, all so immensely talented and unique in those talents. I am continually floored by the amount of quality work coming out of the scenes I run in -- and the people I know comprise just a fraction of the active artists in the area. Filmmakers, poets, comedians, actors and actresses, musicians, circus performers, fire spinners, metal sculptors, programmers, writers, VJs, DJs...it’s mindboggling. I read in the Somerville Scout that Somerville has the highest artists per capita of any city in the country. I am so grateful to have landed here, so humbled by the amount of awesomeness spewing from my friends and neighbors, and continually motivated and inspired to keep pushing in my own creative pursuits. I love it here. I’ve only scratched the surface in the year (and some change) that I’ve lived here. I’m looking forward to decades more in this place.

Where can people find your work online?
nudaveritasmusic.com is a good start for shows and links to listening/watching
rebeccamakesvideo.com is where you can see some of the documentary film work I’ve done for clients.