An interview with Monira Marzouki a.k.a Lady Bedouin as told to Gilmore Tamny.

Tell us about projects you are currently working on that you’re in the middle of/excited about?

Currently I’m working on the 3rd Specrtamotiv album or new tracks per se.

Have you always wanted to be a singer?

Not really because it was taboo where I lived in Saudi Arabia, but poetry was accepted. I was arrested by the religious police for singing the blues in underground gatherings with what they called expats or westerners. I was in a trio with Troy from British Columbia, and Sal from Spain. I was a published poet and short essayist at the time, never thought of singing, yet was a dancer. I mainly belly-danced. My poems expressed my anger at the patriarchy, capitalism, source of economic and political corruption. Here is one of our old live jams where I sing one of my poems with the “expats” in Saudi Arabia;

(We were never filmed live or allowed pictures because it was against sharia law to do that in the capital of Saudi Arabia, and I escaped a punishment of 60 lashes and imprisonment for the false accusation of assaulting a religious police officer, and moved to Boston in 2012 for a scholarship). In Boston I began a solo project; Lady Bedouin of the Cosmic Tribe before I met my bandmates of Spectramotiv. I’m a poet first, performer second, singer third. My performances include acting; the following is short movie I starred in that got me a best actress nomination at the 2016 Boston 48 Hour http://www.48hourfilm.com/boston-ma for the silent short flick Cereal Delirium;
https://www.youtube.com/watch?v=AzIRBdT1KyE

I was a cast and writer at the award winning (the station gave the show the award) comedy show S’news at the Somerville Community Access Television (SCATV): 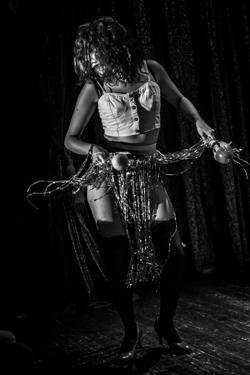 I continued dancing and became an amateur burlesque dancer. My burlesque performance name is Mata Whori;

I feel my answer is becoming an artist résumé, but the reason why I happened to be a vocalist in a band is because it’s an electronic punk vessel to politically charged lyrics. I get to both act and dance. I wish I was more of an activist #revolution #coming #soon. Singing is also another form of reciting my poetry

The lyrics (I’m assuming you write them, although not all singers do, I know) to your songs—can you describe your process?

The process includes free-styling while jamming or daydreaming with my bandmates, since we use electronics, the beat goes on forever. I’d whip up my lines, speak whatever comes to my mind, following the rhythm and flow, while my bandmates are jamming on their guitars. Notions emerging from chaotic emotions would become choruses. I select the verses after listening to our long improvised and recorded jams.

Spectramotiv’s new video, tell us what the experience was like making it?

It was a surreal experience, and I froze my butt wearing a flapper’s dress in blistering cold weather. I remember the temperature was 24 degrees and I had my flask on me. It was the only way to tolerate that winter shoot. As for the experience, it was pretty smooth and natural thanks to Zachery Katz and his son Merlin. Zach is a fellow Somervillain who lives at Brickbottom Artists where his son filmed us at his vibrant and colorful loft. Merlin also filmed us at various streets, bridges and tunnels in Somerville. We filmed at one of my fave neighborhood spots on Broadway too: Winter Hill Brewing Company. There was footage of one of our shindigs at the Marmion Center for the Arts sadly being demolished in Jamaica Plain.

What do you like about the experience of performing? What is hard about it? Have you always like it? Do you feel like you learn each time you do it? 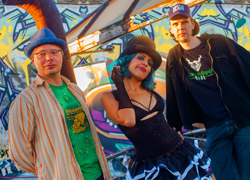 What I like about performing is that it challenges me to drop my fears. I try my best not to shut my eyes when I’m performing because I tend to do that and I don’t know why… My inner lioness is discreet when the jungle isn’t too wild. What’s hard about performance is looking the audience in the eyes. I find it to be awkward sometimes as it feels intimate. Each time we perform, I don’t know what to expect. We are local DIY artists who perform in all sorts of places. It’s a different experience every time we do it. We never sound the same in each gig we play, and I’m definitely learning through each experience, trying to improve my performance and our sound.

What’s been your favorite compliment about your work? Have you ever gotten a compliment that felt (if unintentionally) like an insult? Or vice versa?

The following is my favorite compliment our band Spectramotiv received from a write up on Boston Hassle by Charles Perron:
“Lady Bedouin herself is a kind of heroine or goddess navigating all of these industrial, wasted adventures. Whether or not her character is made up is sort of irrelevant – the world feels very real and sufficiently complex. She seems to be reporting from a certain kind of lifestyle or ideal – a place where cosmic, powerful love is really an attainable thing and sex with gods is possible.”  Source: https://bostonhassle.com/spectramotiv-spectramotiv/

I have received hate messages, as well as perverted messages from strangers on social media. One racist xenophobic comment was by someone messaging me from a bogus account, urging me to get the f*** out of here if I don’t approve of the politics or system.

I keep performing, as bad as it may sound, I don’t stop the performance or anything like, show must always go on (no matter how shitty I sounded due to technical difficulties). I remember a performance where I couldn’t hear my voice at all, and I didn’t stop. I don’t know if that’s loyal to the pieces we created or not, maybe I should reconsider next time.

How do you like the recording process vs. performing?

I prefer performing over recording because recording is a hectic process. My bandmates and I try to sound as tight as possible when recording, and it’s repetitive and hectic. Performing is an unpredictable process that doesn’t follow a single routine and requires gut and flow, and usually sounds more raw and real than any recording.

This is a tweet I wrote the other day: “When innovation goes to shareholders, there is no innovation.”

I can bike around safely. We have Market Basket that’s affordable for groceries unlike our rent, and most importantly, we got music venues and spaces to play at.

Thoughts on the arts community in Somerville?

We need to stand together as artists and community and take a stand against the atrocious rent hikes. Somerville is vast and huge, filled with artists

Have you dabbled in any other mediums? Writing, choreography, sculpture?

Recent musical discoveries you're into?

I can’t stop listening to this album I recently discovered. It’s made for drummers and percussionists. Niagara’s self-titled album (1971), available on iTunes. Same era as Neu! and Kraftwerk that happen to influence my band’s music. I was shocked to know it’s German, I thought it was an album produced from Africa.

Musical community in Boston/Somerville…? Any thoughts.

It’s kinda of dramatic and rough at times as generations are clashing. There are so much talented artists in town, but there are major issues with the venues and spaces as rents are getting higher, and attitudes are getting older and too outdated for the younger generation. It’s becoming harder for DIY artists to earn a living or receive any income through their art. Yet on a positive note, in Boston or Somerville, your voice can be heard, as well as your story or concerns you would raise as a musician, artist or even attendee. The support frequently happens especially once you reach to the right members or groups of the local music community. There is a strong female presence in the Greater Boston Area rock or music community as well. This is something I’m very fond of. There is a strong desire for progress and change among the musical community of Boston and Somerville where I’m at, and it’s something to be proud of.