I grew up in the Boston area and did my undergrad at Harvard, where I made many wonderful creative friends and learned (among other things) the value of intensive extracurriculars. After college I spent a year abroad, which amazing in many ways but showed me clearly how much the Boston area felt like home. The next year when I moved back I found an apartment in Porter and have been putting down roots in the area ever since.

Have you always wanted to do theatre?

My answer to that is a resounding yes and no. I've never considered being involved in theater professionally; in college I sang with two choirs and an a cappella group and didn't do a single musical or play, and when I graduated my pie-in-the-sky dream was to become a novelist, not an actress. From that angle, I'm pretty much the last person you'd expect to be running even an unofficial musical theater company. But I've also always loved theater, especially musicals: my sisters and I used to put on mini-productions with our next-door neighbor in elementary school, and I did participate in theater in high school when I could make it fit into my schedule. I think it was because theater has always held this place as a very fun thing I'm not very serious about that I was able to conceive of the unorthodox model of Small & Casual. Most of us who do these shows have other priorities and commitments and wouldn't have time for the full several-month run required for a more serious community theater production—but we love being able to carve out just a week and a half at a time for a theatrical venture that is fun before it is anything else.

What production or performance most inspires your work?

Probably the most inspiring theatrical performance I've been to was Ghost Quartet, at the Oberon in the fall of 2015. It's a four-person show by Dave Malloy that doesn't offer much in the way of sets or costumes or even cohesive storytelling, but the strength of its music makes those traditional theatrical mainstays feel irrelevant. I still remember what it felt like when that first chord hit me, and it only got better from there. (We did our own version of the show in my kitchen in the summer of 2017.)
Other theater that has expanded my perceptions of the form include various micro-theater productions I've attended in Boston—one in the back of a car that drove around while the driver and his passenger performed a short scene for those of us in the backseat, and another in the living room of an apartment where an actor and a confederate in the 6- or 8-person audience slowly revealed what had happened in their "relationship" earlier that evening. Both of these productions gave the audience the sense of being present in the lives of these characters as the events unfolded. Our living-room productions haven't risen to that level of immersion, but it's something I'd be open to exploring in the future.

What inspired Small and Casual Productions?

The direct catalyst for our first production was that a friend of mine was coming to town. He'd played Charlie Brown in a production of You're a Good Man, Charlie Brown in high school, and I had just found the karaoke tracks for the show online. I managed to find four other friends who didn't think the idea was completely crazy, and we rehearsed twice and performed once for 10-15 friends who sat on the floor of my kitchen. We've gotten a little more sophisticated since then, but the core idea is the same: that we can take these shows that are supposed to be produced on such a huge scale, with months of rehearsal and a plethora of staff and elaborate costumes and sets, and still manage to capture what makes them wonderful without any of that.
On that note, I guess you could say that the larger inspiration for Small and Casual is something I alluded to in previous answers: the love I've always had for musical theater, despite having chosen not to make it a main focus of my life. It always feels a bit like achieving the impossible when one of these shows comes to life in my own living room. 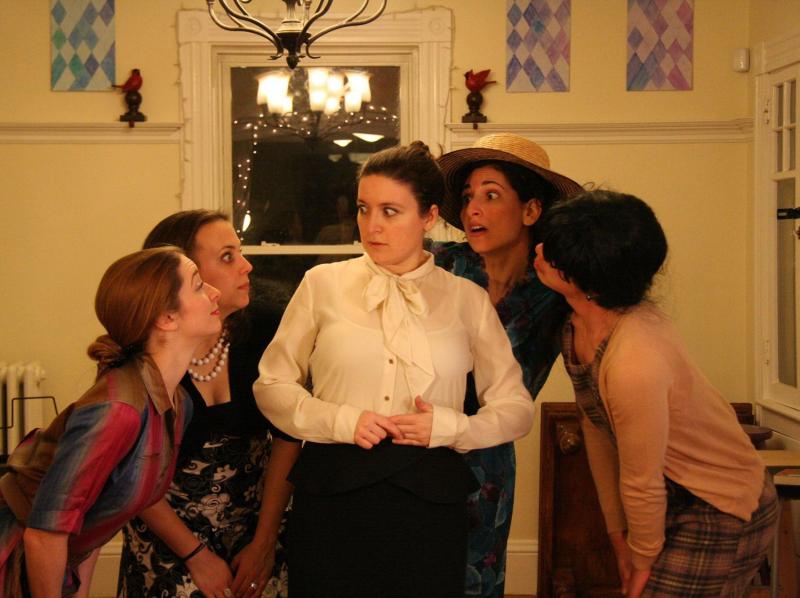 How do you choose which plays or musicals will be performed? Cast? Audience?

One of our cast members (lovingly) said recently that we function basically as a benevolent dictatorship, and that's not too far off the mark. We don't have a formal organizational structure; I act as the driving force, and I choose shows based on what people are excited about at a given time. Sometimes I direct and sometimes someone else does, based, again, on who's excited about the show. The director determines the cast based on their knowledge of everyone's abilities and preferences; if someone's new to the company, we generally throw them into the chorus for their first production to see how they do. We've built our cast gradually from enthusiastic audience members, musical acquaintances, and random happenstance. And our audience is just our family and friends!

I think this model works so well in large part because of the people who are in the cast. We come to theater with a mindset of having fun together to create something awesome, and while some of us like being personally in the spotlight, that isn't necessarily the most important thing for any of us. The model also owes its success to our size and informality. I don't think having a single person in charge would work if we were even one or two degrees larger. One of the trickiest things has been recognizing when something we used to do no longer makes sense as we've gone from 6 performers to a pool of 30+. But it's clear to everyone that there's no reason to keep being involved if we aren't having fun with it, so everyone's very focused on making the shows a good collective experience.

Small and Casual Productions provides its audience with certain kind of intimacy with the plays/musicals performed in a home, do you feel this adds or takes away from one's experience?

It 100% adds to the experience. I have a ton of respect for professional theater and more traditional community theater—their level of polish always blows me away—but Small & Casual is something else entirely. From the beginning, we've had a half-joking attitude that nothing is impossible, and that's turned out to be pretty close to true. Our second show was Wicked. We had Elphaba "fly" by standing on a chair while the rest of the cast crouched down around her. It worked.

There's a magic that happens, I think, when the thing you're trying to pull off is so ridiculously out of proportion with your setting and level of preparation: the good parts become amazing gifts that the audience is happy to receive, and the mistakes become the funniest parts of all. We all know that what we're doing is crazy—and so we're able to do anything. This past month we put on Chicago with a cast of 90% non-dancers and a lead who didn't think of herself as a singer. We've been talking about doing A Chorus Line.
There's another benefit that comes with our extreme level of informality. Because we're only performing privately for our family and friends, we're able to occasionally alter shows in ways that are meaningful for us. We've added a lot of queer storylines that weren't there before. We've updated lyrics when we found them offensive or antiquated. We even did an all-female production of Les Miserables (Lez Ms., we called it) with all the pronouns changed to be feminine, and our four-person production of Into the Woods remains one of my favorite theatrical experiences.

What projects are in the works for Small and Casual Productions?

We have a list of almost three dozen shows we'd like to perform, which should get us through the next eight years or so! I'm personally most excited about Natasha, Pierre, and the Great Comet of 1812, another show by Ghost Quartet's Dave Malloy, which we're hoping to produce in January of 2019.

Not easily, I'm afraid! Part of what defines Small and Casual is that we perform for our friends and family in private settings. That said, I'm always up for making new friends, especially friends who like performing with me!  And, we did perform at Somerville’s Porchfest in 2016 and 2017, and hope to be back again next year.  Keep an eye out for us in 2019!