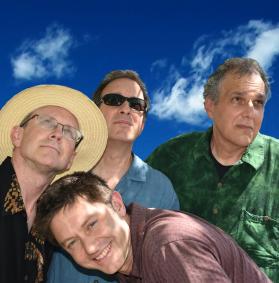 This roots based band from Boston, MA combines 3-part harmonies layered over rock and world beat grooves and has developed a unique sound that moves smoothly from original reggae and psychedelic rock to West African, Cuban, funk and blues. The band is made up of Conor O'Brien on guitars and lead vocals, Chris Chitouras on guitars and vocals, Keith Kirkpatrick on bass and vocals and Frank Laurino on drums and percussion. Some influences include Paul Simon, Fela Kuti, Bob Marley, Peter Gabriel, the Beatles, Buena Vista Social Club, Salif Kieta, Baaba Maal, Grateful Dead and Zani Diabate.

Chris Chitouras has been playing guitar for 30 years, incorporating rock, funk, blues, folk, reggae, world and West African styles. He played with Babatunde Olatunji & the Drums of Passion for 12 years, with Aierto Moreira (Miles Davis, Weather Report) joining them on one occasion, and has performed at the New Orleans Jazz Fest and headlined a benefit concert with Bonnie Raitt & Jackson Brown, Joan Baez and Loggins & Messina. Chris has studied and performed with many world renowned African artists, mostly from Mali and Nigeria - Salif Kieta, Toumani Diabate, Habib Koite, Oumou Sangare, Djelimade Tournkara, Bassekou Kouyate as well as some of Ali Farke Toure and King Sunny Ade's musicians. He also studied with Zani Diabate, one of Mali's master guitarists, from 1997 until his passing in 2010 and has traveled to Mali on many occasions, often donating musical equipment to musicians he met. Chris has also enjoyed a 25 year musical collaboration with one of Fela Kuti's favorite guitarists.

Keith Kirkpatrick started playing his brother's ukulele when he was five years old. Over the years, he's moved on to guitar, electric bass, and upright bass. The instruments have been getting lower, louder, and much bigger, a trend that really can't continue. Keith has played rock, jazz, pop, folk and world music with Boston area bands since 1984. He has been a bandleader, a vocalist, a composer and arranger. He is also currently a bassist with Bill Champitto and Max Klau.  He recently played electric bass with Matimba y Rufemelo, a group of Boston area South Africans.

Frank Laurino is a percussionist by accident. His big-band-drumming father and opera-singing mother tried valiantly to steer him clear of performance, but music has its ways of seeking its marks. A career in radio brought him in contact with Louie Bellson, Mel Lewis, Bob Moses and Bill Bruford; inevitably, hitting round tubby things with sticks became Mission One. Mostly self-taught and a sucker for anything afield of the mainstream, Frank has played in eleventy hundred rock, jazz and experimental bands in Atlanta and the NH Seacoast, including numerous dates with members of the League of Crafty Guitarists. He is also founder of poetry-jazz groups The Beat Night Band and According To My Dream, along with his current "new jazz" ensemble, MMF. Because they really need it, Frank brings jazz bands into businesses to teach creativity to corporate management.

Conor O’Brien began singing and playing piano at age 5, and performed with choirs for over 16 years. He currently teaches voice and guitar privately in Somerville MA. He has fronted numerous rock, funk and roots groups and studied music privately with Mark Baxter, Sam Davis, Randy Armstrong and at the University of NH. Conor has written more than 150 songs and has performed over 1000 live shows including concerts in the US, Canada, the Caribbean, and Hawaii. Conor has logged more than 2500 hours in the recording studio over the past decade. His most recent recording "No Ordinary Day" was released in 2010. He is currently working on a new studio project which includes the members of Big Blue World and this project is planned for release in 2016. For more information on Conor, go to www.conormusic.com