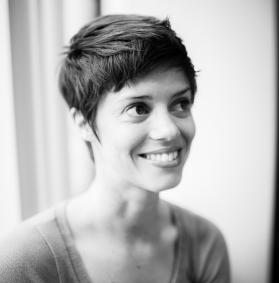 Artist Bio
Christina Balch lives in Boston and works in Somerville, Massachusetts as a multi-media artist focusing on installations. Christina grew up in Southern California and lived in Los Angeles for many years before moving to Boston in 2011. She spent two years in the mountains of Lesotho, Southern Africa where she was a Peace Corps Volunteer working on community health projects for youth and women in her district of Qacha’s Nek. Christina also works as an Interactive Producer on website and mobile application projects. Christina Balch worked closely with prominent Los Angeles artists J.J. L’Heureux and Laddie John Dill. She has exhibited around Boston and Los Angeles.

Awake Project
Awake is a memoir in daily, waking self-portraits reflecting on semi-conscious transition from sleep to awakeness. Artist Christina Balch takes a photo of herself moments after waking up every morning. She captures herself not fully awake, but also not asleep, in a state of foggy awkwardness and vulnerability, not completely in tune with one’s senses yet. Christina is inspired by feminist artists during the 1970s who used their bodies and lives as artistic experiments and documented the progress in photographs such as Carving by Eleanor Antin.

The Awake series was started in July 2012 and continues today. Artist self-portraits are updated daily on the project website: http://iriseinthemorning.wordpress.com