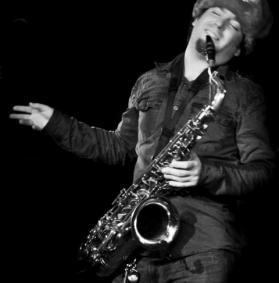 Blossoming from the Slavic heart of Greater Boston, the Somerville Symphony Orkestar is an all-original Eastern European Punk Funk band. The SSO beats Balkan, Klezmer, and traditional Russian music into a funk-punky pulp sure to beef up and beautify your life. The SSO spectacle is a carnivalized punk show that turns its audiences into equal parts mosh-pit and horah. Complex six-piece arrangements reign in the chaos only to explode in shuddering “fun-gasm” after “fun-gasm.” The SSO has been performing in and around the Boston area for over two years have received a lot of recognition after their local album release. They have performed at Boston’s Greenfest, the Somerville ArtBeat Festival, and Boston’s First Night Festival along with headlining at numerous music venues throughout New England.

Band Leader and founder, Joel Edinberg was originally discovered in the outskirts of Lithuania. Deserted at the age of 3 outside the city of Jonava, he was taken in by a small tribe of Jewish Gypsies. They taught him the ways of their tribe, including how to hunt for wild gefilte fish and how to play Klezmer and Gypsy music. The tribe was famous for their dancing and music, as well as appearance. The water they drank had high levels of silver causing their skin to turn blue. He toured with these gypsies for years playing for circus performers who quickly earned the name, The Blue Men Troup. At the age of 16, Wikileaks published the Government’s plans to forcibly buy out his people’s land and mine it for precious dolomite. To save his life, his family sent him off to Boston with a mission to form the Somerville Symphony Orkestar, which would spread the word of his people…and hopefully to help prevent any more filmmakers from ripping off his life’s story. 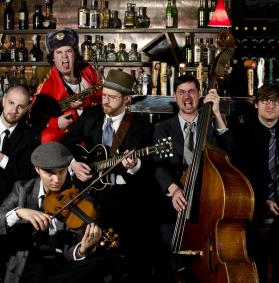