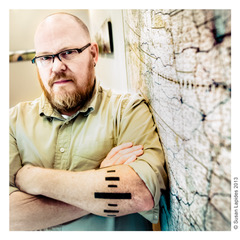 Bruce Myren is a photographer based at Somerville’s Vernon Street Studios. He holds a BFA in Photography from Massachusetts College of Art and Design and an MFA in Studio Art from the University of Connecticut Storrs. His photographs have been exhibited nationally and published internationally. Bruce has taught at Amherst College, Fitchburg State University, the Rhode Island School of Design (RISD), Northeastern University and the University of Massachusetts, Dartmouth. His numerous solo shows include the Danforth Museum of Art, the University of the Arts, and Gallery Kayafas in Boston, where he is represented. His group shows include the Houston Center for Photography, RISD Museum’s Chace Center and the Phoenix Art Museum. Bruce’s projects have been featured in the Huffington Post, Slate and Discovery Channel. He was the Chair of the Northeast Region of the Society for Photographic Education from 2010-2016 and was a board member of the Photographic Resource Center, where he was also the organization’s Executive Director in 2018. He frequently serves as a visiting artist, panelist and juror. Bruce is co-organizer of the annual Somerville Toy Camera Festival.

Do you remember when you first knew you wanted to be a photographer? 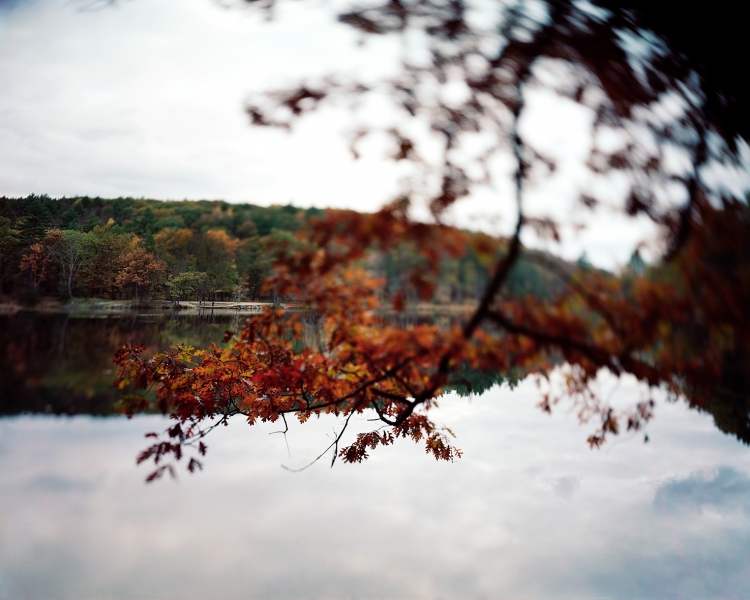 Thank you for this – it is an honor to be selected as Artist of the Month.

When I was eight or nine years old, I wanted to be an architect, but thought I would have to do too much school. Alternatively, if I just picked up a camera, I could be a photographer. I got my first camera when I was nine, a Polaroid, and that was when I fell in love with photography – watching the images come up on the paper. I took a class at the local community center, taking pictures with a 126 camera and developing them. I was smitten.

Can you talk about your early experiences as an artist?
It felt like play. I played with the Polaroid and 126 cameras and got a 35mm camera when I was 16. That year, I stopped going to classes in high school and just started doing photography all the time. I took pictures of my friends and started working at the school’s yearbook. I remember doing some pictures of mushrooms and trees, but my favorite pictures were of my friends. The yearbook was where I first got to see my images in print. 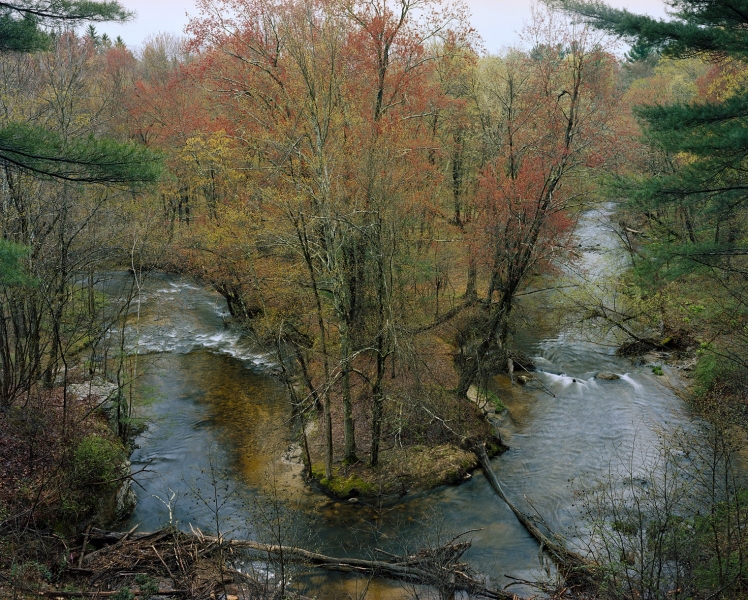 My first job as a photographer was working at a local newspaper. I walked into their office and asked for the editor, and she gave me an audience. She asked for my portfolio. I told her I didn’t have one, but that I was really good. She smiled, reached into her desk, and handed me a roll of film. She said she liked my chutzpah and told me to photograph high school sports and bring back the film. So, I went out and photographed field hockey and soccer games. I brought the film back, and then I waited. I was also a paper boy for the same paper. When I got the stack of newspapers, I opened one up and the whole middle page was filled with my images. It is a special memory; I was just blown away. I worked there for a few years photographing sports. Looking back, it set me up for some disappointment and failure later because I was so successful early on. When I started taking art pictures, it was harder, and I suffered in my early artistic endeavors because of it.

What made you want to take artistic pictures?
I first went to a photography school that was not art-related – it was a commercial program, and I realized I wasn’t a commercial photographer. With sports photography, something was happening, and you were reacting in the moment. But with commercial work, someone told you what to do and you just executed. It did not feel like my hand was in it as much. I started thinking a 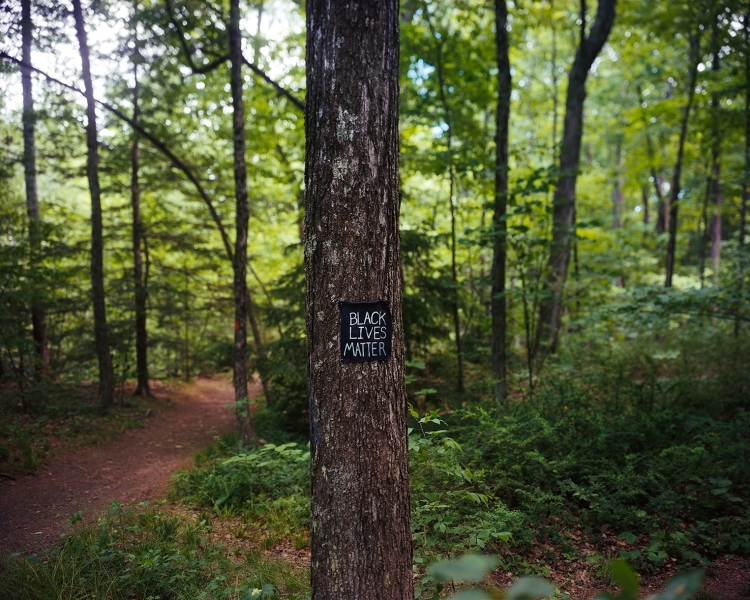 bout making photographs for myself, for other people too, and sharing my vision with the world.

My early influence was Ansel Adams. He inspired me to think about the idea of nature, our place in the world, and how we interact with the world. I read about him just as much as I looked at his pictures, so I got a sense of his approach to landscape and nature. It started me on exploring landscape as part of my own work.

How would you describe what you do now?
I use landscape to explore issues of place, to explore longing and experience, and where those emotions connect in a landscape. I try to make my work personal and universal at the same time. Landscape photography is about finding an expression of humanity. The definition of landscape is a man-made construct, it is created by looking at a place or manipulating the world around us, by building buildings, or a park, or a trail through the wilderness. It is a manipulation and a human construct.

How has teaching affected your work? 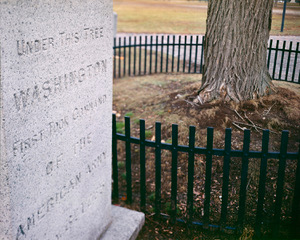 I haven’t been teaching lately. I got a little burned out being an adjunct. I love the students, and watching them learn and grow and seeing them change as artists. The sense of connection and getting to know them. It is wonderful and I miss it terribly. But at the same time, I did not get much support from the institutions.

Also, I’m older now, and my thinking about teaching [has changed]. Other voices need to be heard in the teaching realm, other than who I represent in society. I’m a middle-aged white guy who does landscape photography. It is time to step aside, and let other voices in.
When I teach, it affects my personal work – you bounce ideas off of students, and students bounce ideas off of you. I feel that I learned more from students than I gave them – there are 15 or 20 students in a class, and they give you so much back. It affects how I think about my work and talk about my work. That kind of experience with them, that time, I miss it.

What brought you to Somerville?
I bounced around studios for a while. The community in Somerville was amazing. There was a lot of space, and a different feeling in 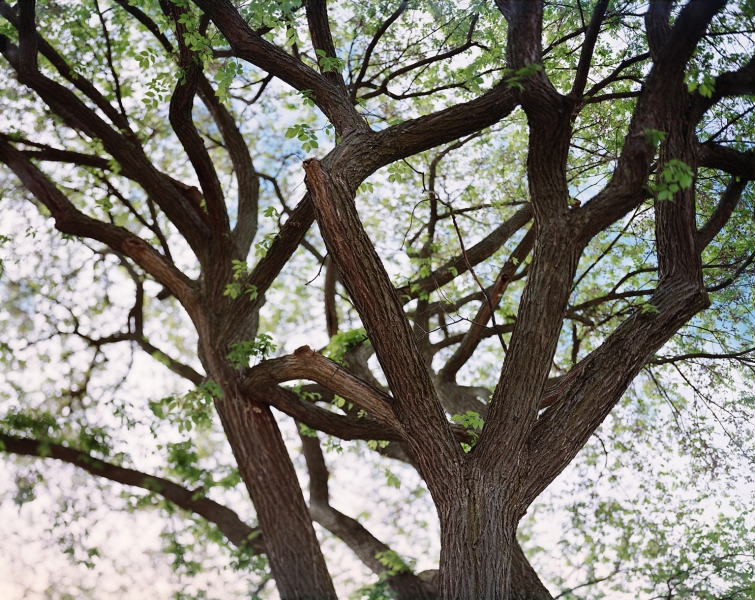 the studio buildings than in Boston. Before, I was in the South End, and sometimes it felt like people had their showroom in their studio, but they weren’t there creating work as much. Here, in Somerville, they are working, not just selling their work. When a Vernon Street space opened, I jumped on it. It was a little bit of downsizing for me at first, but I fell in love with the people and the building. I live in Cambridge, but there aren’t the kind of studio spaces in Cambridge as we have in Somerville. I’m concerned about the train coming to Vernon and what it might do to the building – artists may be priced out or kicked out. It is a big issue, artist’s space, we know that. 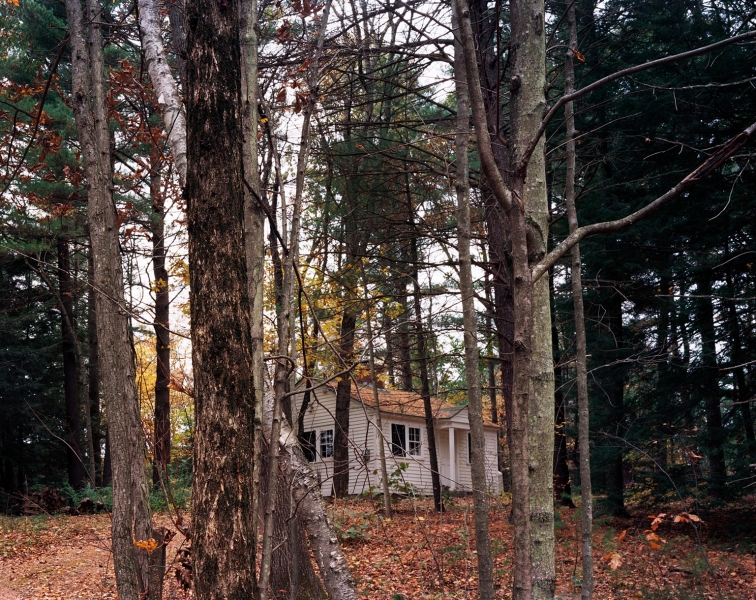 environment. I’m looking for larger elms on private property I can photograph, if anyone wants to reach out with ideas. There is a big tree by Market Basket [outside Union Square]. I scouted the location, but I want the right light and the right mood – I haven’t figured it out yet.

I have another series called Fort Juniper, in and around a poet’s house in Amherst, a poet named Robert Francis. I’ve been photographing the intersection of his work and writing, and my experience on the land, and where those two practices meet, photographically. This has been an ongoing project since 2009.

As a child, I was aware of Robert Francis – I learned about him in elementary school, and saw a documentary about him in 7th grade. I was in graduate school when I was photographing another project in the vicinity called Markers: Memory about my memories between 2nd and 7th grade. I was making a picture of a memory and realized I was close to his house. I had been thinking about poetry 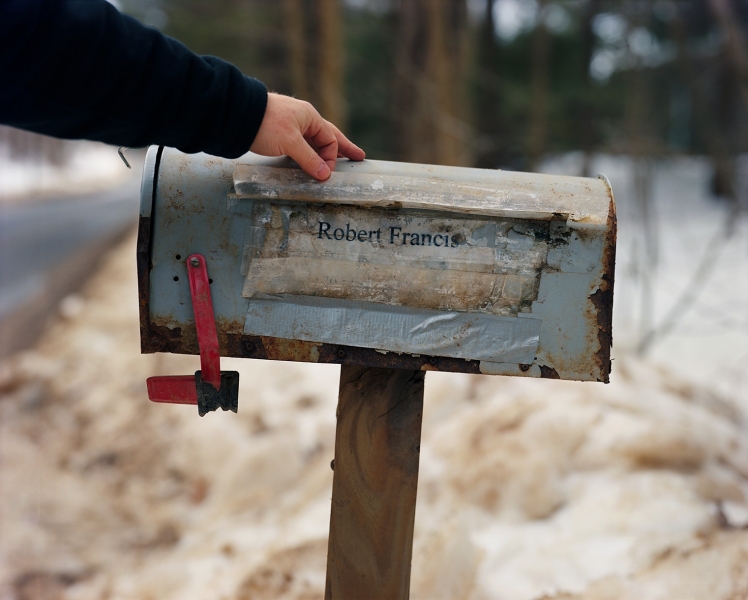 and poetica, so it clicked, and I did some research. The house was still owned by Robert Francis’s estate – he left money to maintain it. I found the estate executor, and asked if I could have access to the house. They rented it out to poets, so I talked to the tenant, and got to be friends with the executor and trustee. I started photographing at the Robert Francis house and went downstream. There is a river that runs west, to where I grew up. I was in 7th grade when I moved to a house by the river.  I began incorporating more of the landscape and my personal experiences on the landscape. It has been on my mind as the project is continuing.

How has the last few years impacted you or your work?
It has affected me a lot. When the first wave of the pandemic hit, the streets were empty, no one was out. Many people photographed those empty streets.

In May 2020, I spent a lot of time on my back porch. There is a birch tree, an elm tree, and a third tree, an arborvi 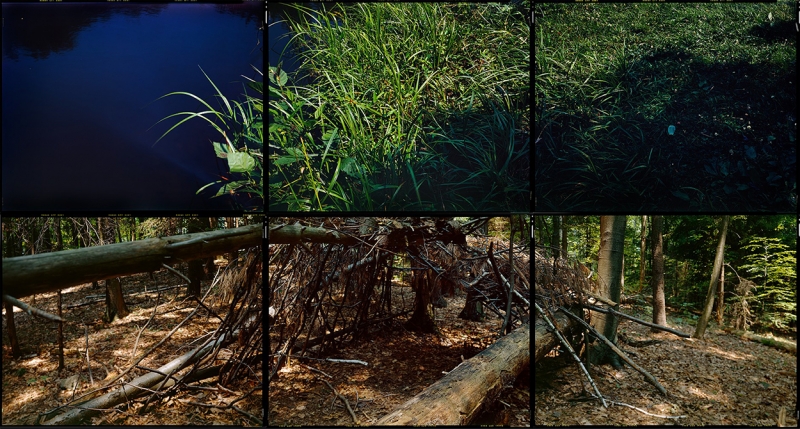 tae. I look at these trees when I sit on my porch, and I see the sky. I started photographing that view of the trees and the sky every day, sometimes multiple times a day, to see how it changes through the light of the day and the seasons. The elm is outgrowing the birch tree in the view, it is becoming bigger and more jungle-y. A thousand pictures is a lot of pictures. I do it with my cell phone. That is how I’ve dealt – the sense of home and sitting and watching. That is what I’m thinking about, watching the world go by, and our lives put on hold. Even when we are doing normal things, it still feels abnormal.

The project really changed the way I see things. It is about the changing light, the growing tree, and the seasons. The perspective of a single viewpoint. [For images, go to @bmyren_treesandsky]

Is there someone or something that was important in getting you on your way?
The newspaper was one thing. The other was going to Mass Art and having one professor believe in me, help me and see my potential 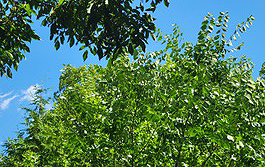 and encourage it in a way that I never had before. My parents were always supportive, but this professor stepped right in and she said to me, your pictures are terrible but you know how to print, so if you help me teach printing to seniors (I was a freshman), I will help you make better pictures. That was Barbara Bosworth at Mass Art. I had never had that experience artistically before. She was an important mentor.

You also do custom printing?
I provide lab services and do printing and scanning for other people, primarily other photographers, but I do work for other artists too. I started Bee Lab in 1999 and I’ve worked with many artists at Vernon. In the fall, I expanded my studio and it became a custom lab. I have a 60-inch printer, so I can print larger images and I have a high-end flatbed scanner. I would be happy to talk to people about their projects. 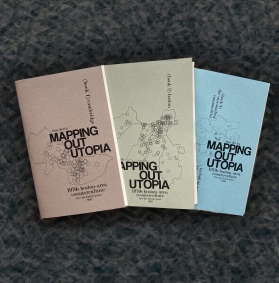 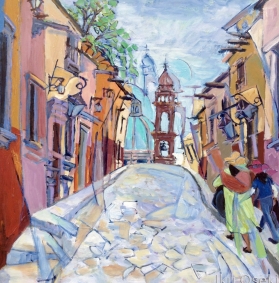 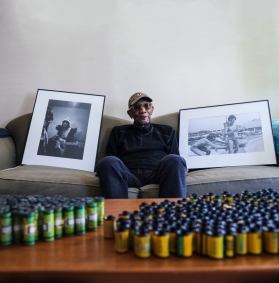 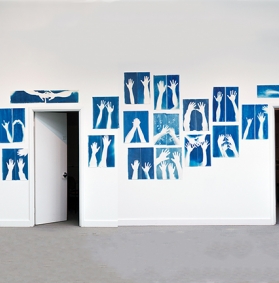 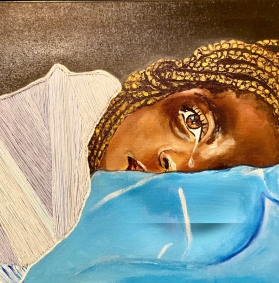 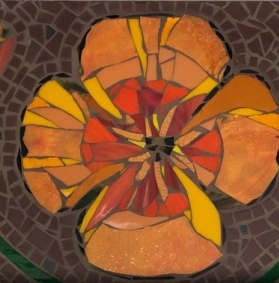 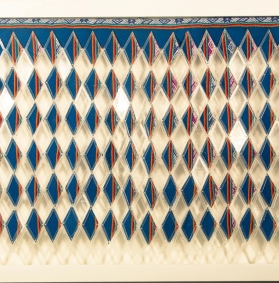 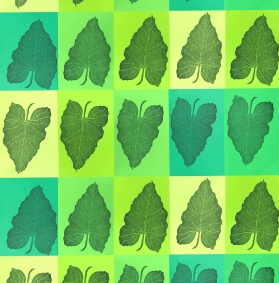