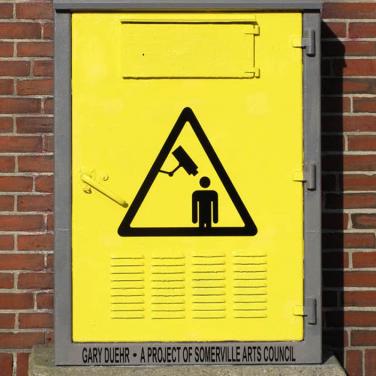 Warning: Camera In Use
"This yellow-and-black hazard sign warns passersby of invasive surveillance. It's part of my series "Hazards of Modern Living," which comments on the culture of fear in the post-9/11 era. At times absurd or chilling, the signs caution us to avoid dangers such as lightning, falling planes, and drowning—as well as apparently innocuous objects like forks, clocks and sad books.

At the center, suffering all these fates, is a stoic, Buster Keaton-like Everyman, familiar from Men’s Room signs. Blank, expressionless, he is restricted to several poses: flailing, running, and sitting or standing unawares."