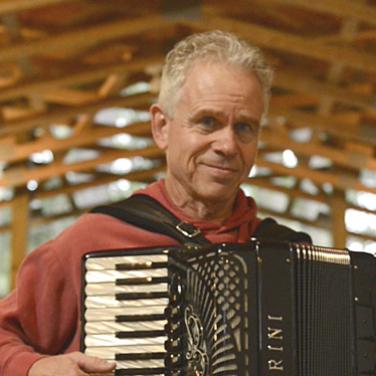 It may seem that the piano accordion is a natural extension for any keyboard player. But Tom and Barbara Pixton discovered that while many fundamentals are the same, the accordion possesses its own unique and demanding set of characteristics. Since its inception in the 1820s, the accordion has found an astonishing range of voices in a wide range of cultures. Tom and Barbara’s particular interest is the traditional music of southeastern Europe, and will play some of their favorite tunes from that region today.

Tom and Barbara Pixton became interested in classical music before high school, and pursued careers in music after graduating college in Boston: Tom as a concert harpsichordist and Barbara as a piano teacher. After a decade, they decided to pursue more lucrative careers, Barbara as a graphic designer, and Tom as a higher ed communications consultant.

Concurrently, they discovered the traditional dance scene in Boston, and quickly became involved in recreational International, Balkan, Scottish and English dance events. Soon thereafter, they combined their music expertise with their love of traditional dance. They have since become regular contributors to live music events sponsored by the Folk Arts Center of New England, the Boston Branch of the Royal Scottish Dance Society, Pinewoods Dance Camp, the Christmas Revels, and many other organizations.