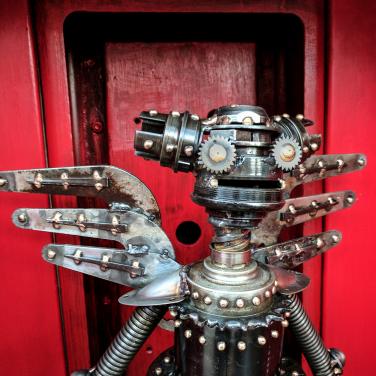 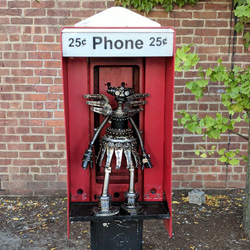 Obviously I named Davis j325 after the square she inhabits. I built her to be tough in the hopes she will survive on her own: although I find Davis Square to be very friendly, she still has to endure whatever life and the elements throw at her.

I added what I feel is a little piece of Somerville history into Davis. My bicycle chopper gang, known as SCUL, has looped Davis Square dozens – if not hundreds – of times on its Saturnight missions; Davis is one of the few ‘constellations’ we often loop twice. For ten years my ship – the flagship of SCUL, UBS Cloudbuster, carried what we referred to as the ‘Disco Deth Stah’: a sixty-pound telescoping mast supporting a lit and rotating mirror ball – a shining beacon of my beloved gang, originally inspired by Project MUM. After many missions and more than a few crashes – the last of which was into a giant I-beam under a bridge near Assembly Square that nearly dashed me to the rocks of the low waters of the Mystic – I retired the sixty pound telescoping mast, and saved the steel for later projects. The skirt of Davis j325 was once the very cradle that supported the Disco Deth Stah, and has seen traveled on many amazing adventures before retiring. 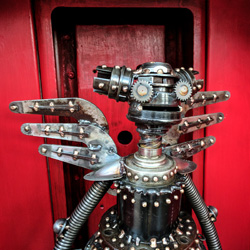 SCUL was a huge help in the installation process: Red Squirrel, Leotard, Acehole, Rad Max, Lord McFuzz, Perilous, Buckminister, Pastry Queen, Excess, Kpafun, and the passerby who owns a cordless sawzall, pitched in and provided support. The installation took four hours and were done before sunset, so we did not have to work in the dark. There was a lot of excitement from passers by as we worked, delighted to see the new lady Davis. I felt strange leaving her alone for the first time, as if I was forgetting something; however as we rode away toward our home base, a feeling of great joy came over me, knowing she’ll hopefully serve as a reminder to those in Davis to stay tough and to stay positive and hopeful no matter what life throws at us

I’m also excited to have Davis so close to the Somerville Theatre, since I have been making the trophies for the Boston Independent Film Festival since their second year. 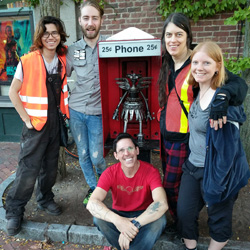