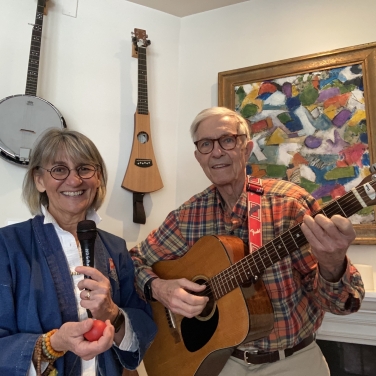 Dan & Jane’s haphazard career as folksingers has included occasional house concerts and busking in Harvard Square and Martha’s Vineyard. Dan’s been singing and playing guitar since 14. Despite several superb instructors, he’s kept his proficiency at a pretty low level. But his enthusiasm for ‘60s folk music, especially Leonard Cohen, has somewhat made up for lack of talent. With stardom beyond reach, he found his niche as the now retired Executive Director of Club Passim. Jane is a retired teacher, painter, and rank amateur singer. She’s been wailing away in church choirs and community theater and choruses for a very long time.