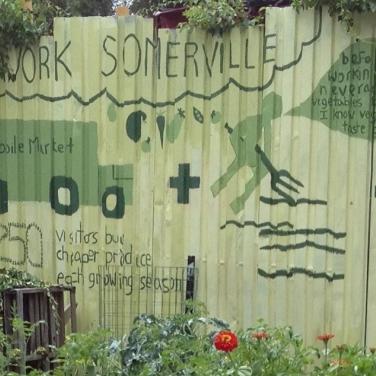 This mural was designed by a class at Prospect Hill Academy with Artist Emily Bhargava and with support from Rahul Bhargava of the MIT Center for Civic Media.

The image is an infographic that tells the story of what Groundwork Somerville does. It begins with a man reaching for a basket of veggies.  Across his chest it says “healthy food is hard to get”.  The story then moves from the cost of healthy food and the number of people with prediabetes to the number of unused lots in somerville and how much land has been reclaimed for urban farming.  It shows the mobile market that brings affordable produce to low income neighborhoods (and how many people visit the markets), and shows the number of youth who participate in garden programs and some of the impacts the programming has on them.  It then shows a united, healthy and wealthy community.

The mural was presented on July 30th 2103 at the opening of the South Street Farm, Somerville's first official urban farm.