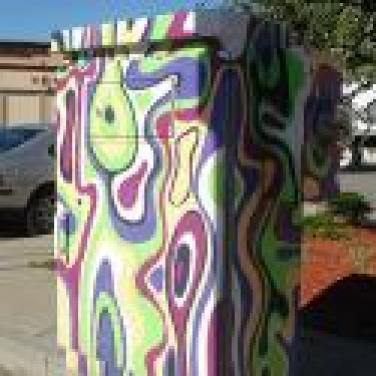 This switchbox was painted in a style inspired by the artist's work on found wood. It mimics a wood grain pattern in vivid colors to attract attention to the inherent beauty that exists in nature. More of Tova's work on wood can be seen on www.tovaspeter.com.

Funny story: someone actually called the police while Tova was painting to let them know that someone was doing graffiti. When the police arrived and confronted Tova she noted that she had permission and clearly would have run away when she saw the police coming otherwise. Permission confirmed, the policeman complimented her on her work.