A Very Brief History of Somerville 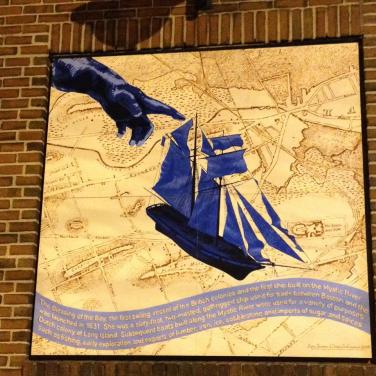 Each panel represents a period in Somervilles industrial history, spanning over 3 centuries juxtaposing three elements: A map from the time period represented (18th, 19th and 20th Centuries); an image of an object manufactured in that time period; and a human hand manipulating the object, to represent the imposing nature of industry and the hands of the workers who support the industry from within.

Ship Building18th Century. The industrial theme is shipbuilding. From the first ship built in the colonies to the last, built at the end of the 18th century, Somerville played a major role in the maritime trade history of New England. In the heyday of shipbuilding in the 1800s there were10 shipyards within a mile along the Mystic river alone. This panel incorporates a human hand guiding the ship, emblematic of the notion of the white mans myth being divinely guided to whatever adventures and trade layahead.