Cow Skulls on the Central Library 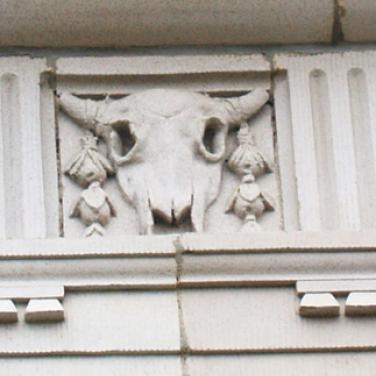 "The cow-like skulls on the exterior frieze of the Central Library are called bucrania, after the Latin word for ox skulls. Sculpted bucrania were a common adornment of ancient Roman temples-a reference to the oxen sacrificed to the gods. Architects often copied elements of ancient temples when designing libraries to suggest that libraries are temples of knowledge. The skulls can also be seen as a reminder of the role of the meat-packing industry in Somerville economic history. The local growth of the industry was first made possible in 1855 when the Grand Junction Railroad provided Somerville a rail connection both to points west and to the wharves of East Boston. By 1875, the products of Somerville meat-packing plants had an annual value of $4.4 million-more than all other Somerville industries combined. By 1898, Somerville was reportedly the third largest meat-packing center in the United States and was known as “the Chicago of New England.” The last meat-packing plant in Somerville is believed to have closed in the mid-eighties." - Kevin O'Kelly