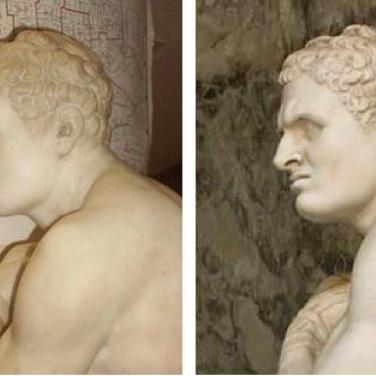 "Here at the Central Library’s reference desk we have a companion – a statue of a Greek boxer who, in accordance with long-standing Library tradition, we call Clarence. Clarence is actually Damoxenus, and he has an interesting history. “Damoxenus. A boxer of Syracuse, excluded from the Nemean Games for killing his opponent in a pugilistic encounter. The name of the latter was Creugas; and the two competitors, after having consumed the entire day in boxing, agreed each to receive from the other a blow without flinching. Creugas first struck Damoxenus on the head, and then Damoxenus, with his fingers unfairly stretched out, struck Creugas on the side; and such, observes Pausanias, was the hardness of his nails and the violence of the blow that his hand pierced the side, seized on the bowels, and, drawing them outward, caused instant death to Creugas.” (Hellenica) Then, “His pitying countrymen placed the olive crown upon the head of the dying Creugas; and, struck with horror at the deed, condemned the ferocious conqueror to perpetual exile.” (Albrizzi, Isabella Teotochi. The Works of Antonio Canova, in Sculpture and Modelling. London: Septimus Prowett, Strand, 1824.) Our statue is a copy, donated to the Library in 1907 by Mr. E. M. Jordan. The original, by Italian sculptor Antonio Canova (1757-1822), stands in the Vatican Museum. Looking at photos of the two statues side by side, I see a number of differences, and not just because ours has had his nose broken and repaired into a shape different from the original (not unusual – he is a boxer after all.) Our statue is an altogether softer version of the ancient boxer, less like a ruthless Damoxenus and more like a…Clarence." - Ellen Jacobs