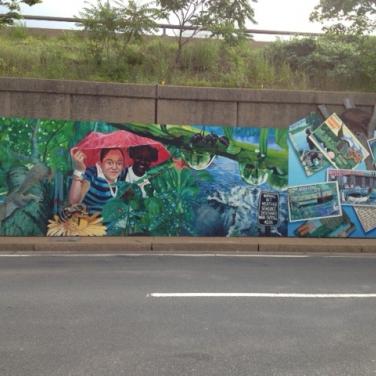 In 1900 a portion of the shoreline of the mystic river, once the site of brickyards, bottling works and wharfs, was seeded to the metropolitan park commission as part if an attempt to preserve the aesthetic character of the river. Access to this land, cut off from the rest of the city by I-93, is marked by the mystic mural on mystic avenue. The mural was painted by teens in the Somerville arts councils mystic river mural project under the direction of artist david fichter and environmental educator scott carpenter. Their efforts were recognized in 1997 with an American rivers award for excellence in urban river education.

Youth are employed each summer to design and create another portion of the mural.