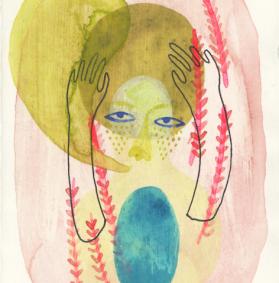 Rebecca Volynsky does not see her work as scripted or planned. When creating mixed media collages, she attempts to reach a destination where all of her ideas and visions are the most clear. Everything that spills out onto paper in the form of repeating patterns and symbolic imagery is under her control. She begins by placing and arranging paper and other media on a surface in order to remove them. Old photographs, graph paper, colorful drops of watercolor, thin sheets of transparent tissue and graphite markings that look as though they attack the page are combined. These are attached onto paper through gluing and sewing, strengthening the paper as a three dimensional object. Everything that is placed on the surface exposes Rebecca’s inner thoughts but also conceals them, allowing the viewer to come up with other interpretations of the work. They sometimes just evolve on their own and fall into place. Rebecca has been deeply involved in and passionate about art organizations in Providence, Rhode Island. She has shown mixed media collage work at New Urban Arts, AS220 Broad Street Studio and the Dirt Palace, among other spaces. She has worked as an Americorps Teaching Artist at Providence ¡CityArts! for Youth, and helped organize the Roots and Rituals Youth Arts Conference in June 2010. Rebecca is currently a student at the School of the Museum of Fine Arts, Boston and is concentrating in Text and Image Arts.