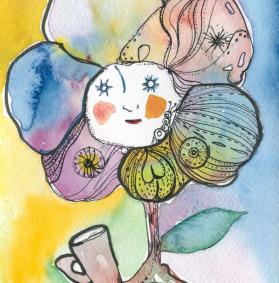 Chie Yasuda studied art in her childhood and early adulthood in her home country of Japan before ultimately moving to the United States to pursue her art. In particular, she enjoyed the work of Georgia O’Keefe, and she moved to the legendary watercolorist’s desert hometown of New Mexico in 2002. There, she studied art at the University of New Mexico and received her Bachelors in 2007.

In 2009, she moved to Somerville, MA with her husband who is a classical guitarist with the New England Conservatory. She currently studies Children’s Book Illustration at the Rhode Island School of Design (RISD).