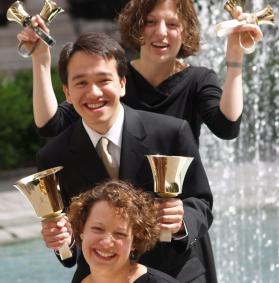 Back Bay Ringers (BBR) is an advanced, auditioned community handbell ensemble based in Boston, Massachusetts. Founded in 2003, BBR has quickly developed a reputation for excellence, regularly performing at such Boston-area landmarks as Faneuil Hall, Symphony Hall, the Boston Children's Museum, and the Prudential Center. Back Bay Ringers has also performed in festivities associated with the 2004 Democratic National Convention as well as the Boston Marathon. BBR's first recording, Merry and Bright: A Celebration of Carols with the Back Bay Ringers, was released in 2007. The ensemble's latest recording, Perpetual Motion, was released in the summer of 2010.

BBR is committed to preserving and promoting Boston's key role in the history of our instrument. The first community handbell ensemble in the United States was founded by Beacon Hill resident Margaret Shurcliff in the early twentieth century. More than a hundred years later, Back Bay Ringers is proud to honor that tradition and carry it into the twenty-first century by exposing new audiences to handbells, in Boston and beyond.

Under the leadership of artistic director Griff Gall, BBR has grown into one of the country's most innovative handbell organizations. In its short history, BBR has founded the Boston Handbell Festival, a yearly celebration bringing together the region's best community and church handbell ensembles, with the proceeds donated toward the purchase of handchimes for a Boston-area public school. It has also commissioned two original works, sponsored a workshop with a noted handbell composer, and performed concerts around the Boston area and throughout the Northeast. BBR's members and directors have become leaders in the national handbell community as clinicians, organizers, and administrators.

In addition to its renowned touring ensemble, the Back Bay Ringers organization has sponsored development of two additional ensembles. Back Bay Carillon is a locally-based ensemble that focuses on fundamental ringing techniques, performing at such venues as Children's Hospital Boson, the Boston Children's Museum, Goddard House, and United Teen Equality Center in Lowell. In Fall 2010, BBR was pleased to appoint Charles Parker as the interim artistic director of this ensemble. Back Bay Quartet, BBR's third sponsored ensemble, is an advanced-level small ensemble that has received national attention for its dynamic performances and original arrangements. In 2008, the quartet performed a full-length holiday concert at Boston University.

Through exhilarating and artistically sensitive performances, a high-profile online presence, innovative community and educational programs, and community involvement, BBR is fast becoming one of the region's most exciting small arts organizations.