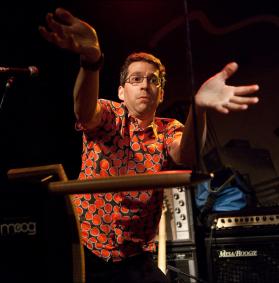 Jon just completed a six-year tour of duty on the Somerville Arts Council where he served on many Local Cultural Council grant panels and helped program the music stages for ArtBeat, the annual festival in Davis Square. He has also been hosting the Breakfast of Champions radio show on WMBR 88.1FM since 1984, back when Alternative Rock was just called New Wave or Punk. When he's not curating or DJing, he works as an actuary and plays the theremin (but not at the same time). He and his wife Christina live in Somerville and had their first child this past October.