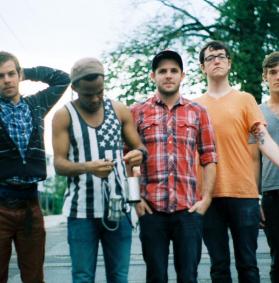 Nemes is an unquestionably unique 5 piece rock/folk band from Worcester, Massachusetts. Led by duel frontmen Dave Anthony (Guitar/Vocals) and Josh Knowles (Violin/Vocals), the band brings what Worcester Magazine calls “a nuclear power plant's worth of energy” to any venue they enter. Energy isn't the only thing Nemes is focused on though. The band's songwriting, involving memorable lyrics and catchy hooks, will always be at the forefront, followed by a wide array of top-notch musicianship.

Since being named one of Alternative Press' top 5 unsigned bands in 2010, Nemes has embarked on two tours of the Eastern US, continued building a local fanbase, and most recently released a full length album. The album is entitled “Don't Flush Me” and showcases the many sides that Nemes has to offer. On the disc, the band seamlessly transitions from arena-sized rock songs to violin-plucking tunes with just as much emotional intensity.

The bottom line (literally), is that Nemes is motivated, capable, and ready to take on any audience put in front of them.