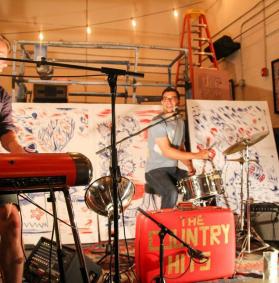 Chris moved to Somerville in 2005, right off the boat (he lived and worked on a boat for a year). His arting began as an actor, but he quickly realized that his true enjoyment came when standing behind a banjo or guitar, singing and playing songs with other people. He is a founding member of The Pennies, an Americana quartet with songs so familiar, you could swear you heard them before, until you realize, and are blown away (or at least mildly impressed) by their originality. He is also one half of the husband and wife duo Ghost Symposium, the Halloween band that sings songs about gypsy curses, zombie love and making out at the drive-in.

Other art-related endeavors have included: acting in the lo-def horror short 'Til Death Do Us Part, painting a ship in a stormy sea for the album art of his only solo record (one copy, one printing), and appearing in "Pirates of the Caribbean 2: Dead Man's Chest".

In other hours of the day, Chris is the Executive Director of Groundwork Somerville, a non-profit organization that give green jobs and job training to Somerville youth, provides gardens-based outdoor education in all Somerville elementary schools, and organizes community residents around issues of open space, transportation and environmental health. They are also building a farm on South Street, which will open in 2012.