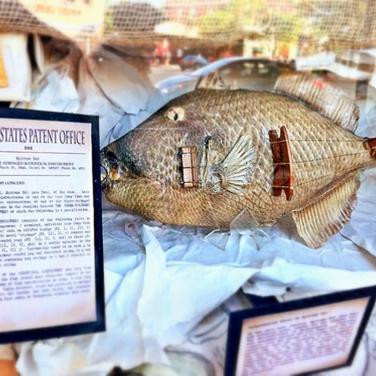 Notated historical consultant, Hilary Scott who has been the formost authority on the subject, collaborated with the Arts Council to bring these curious finds to the public.

About Patent Office of Obverse Innovation and Engineering
Established by President Ulysses S. Grant in the turbulent years following the Civil War, the Patent Office of Obverse Innovation and Engineering (POOIE) served as a clearinghouse for some of the most innovative, dangerous and bizarre inventions of the Gilded Age. Headquartered in a large Victorian on Clyde Street in Somerville Massachusetts, the patent applications deemed “sensitive” or “downright odd” by Patent officials in Washington were forwarded to the Somerville office. The staff appeared to have never exceeded twenty, but their identities remain unknown, and given the destruction that overtook the premises, are likely to remain so. On August 12, 1919, a loud buzzing was heard throughout the central part of Somerville, reaching as far as Winter Hill. In the morning the Clyde Street building had vanished completely.

The Patent Office innovators & excavators:
The June Window of the Patent Office of Obverse Innovation and Engineering was developed and curated from the creative mind of Hilary Scott as part of a collaboration with several local artists to exhibit such an fantastical display.
Featured artists include: