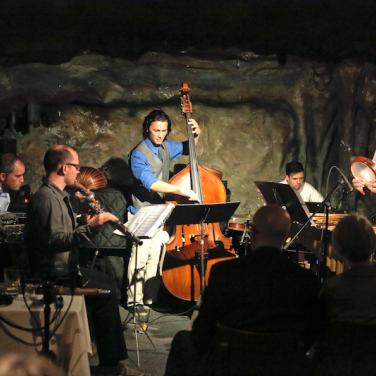 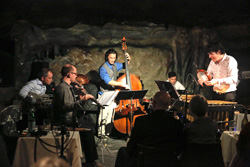 Referencing the exotica of composers ranging from Tchaikovsky and Shostakovich to George Gershwin, Martin Denny, and John Adams, Mr. Ho's Orchestrotica—as a vibraphone quintet—performs global jazz and "exotic" chamber inspired by sounds from Asia, the Middle East, the Balkans, and Latin America. Led by multi-percussionist, vibraphonist and composer Brian O’Neill, the group also features bass flute/woodwinds (Geni Skendo), percussion (Jeremy Smith), acoustic bass (Brad Barrett), and oud/tanbur/resonator guitar (Tev Stevig). The quintet focuses heavily on original compositions and adaptations by O'Neill—"a first-rate composer" according to the Huffington Post—who is highly influenced by a long career as a multi-percussionist in orchestras, jazz groups, and world music ensembles. "If John Zorn is an exotica Picasso, O'Neill is his Georges-Braque counterpart in cubism's transposition to music," says AllAboutJazz. The Orchestrotica has garnered much acclaim, including winning "Best World Music Act" in the Boston Phoenix's annual readers' poll while simultaneously being compared to the Boston Symphony Orchestra Chamber Players.

In June 2011, they released their debut CD as a quartet, Third River Rangoon, which was described by the Boston Herald as “serious jazz and chamber-music writing” and cited as one of the Huffington Post’s Top 10 Albums for 2011. Their sophomore album, Where Here Meets There, was released in 2013, called “Wonderful!” by JazzWeekly, and named one of the Best Albums of 2013 by Panamerika. Both albums are part of the groups Exotica for Modern Living series, which began in 2010 with the big band’s debut recording, The Unforgettable Sounds of Esquivel. That album received “4 Stars” from the Sunday London Times and was called “incredible” by Downbeat. “No other band on the planet sounds anything remotely like Mr. Ho’s Orchestrotica,” says Lucid Culture. Fans can download 6 free tracks of the band’s music.

We are happy to have the band’s original bass player, Jason Davis, subbing for Brad at this event.