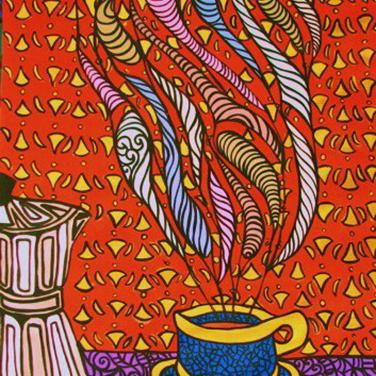 In honor of Hispanic Hertitage Month, The Inside OUT gallery presents October artist Raysa Mederos. Her work consists of a palette inspired by her native country Cuba,using bold colors and outlining them with thick black lines to highlight their brightness. The bright colors through each piece evoke the vibrant light of Havana, where she grew up. The black lines are reminiscent of the ironwork in the windows and balconies of the colonial buildings in Old Havana. She paints to return to the memories of her childhood and the endless hours spent watching her father paint and mix colors. As a child, Raysa was fascinated by the magic of his paintbrush. In contrast,as an adult, it is the peace and joy that painting brings. Each finished piece is an homage to her father and to the majestic beauty of the city of her childhood.

About Hispanic Hertitage Month Each year, Americans observe National Hispanic Heritage Month from September 15to October 15, by celebrating the histories, cultures and contributions of American citizens whose ancestors came from Spain, Mexico, the Caribbean and Central and South America. The observation started in 1968 as Hispanic Heritage Week under President Lyndon Johnson and was expanded by President Ronald Reagan in 1988 to cover a 30-day period starting on September 15 and ending on October 15.

It was enacted into law on August 17, 1988, on the approval of Public Law 100-402. The day of September 15 is significant because it is the anniversary of independence for Latin American countries Costa Rica, El Salvador, Guatemala, Honduras and Nicaragua. In addition, Mexico and Chile celebrate their independence days on September 16 and September18, respectively. Also, Columbus Day or Día de la Raza, which is October 12, falls within this 30 day period.