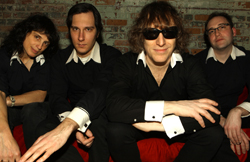 Boston’s Muck and the Mires have been called a high energy blend of the 1964 Beatles and The Ramones. Their songs, reminiscent of the 1960’s British Invasion, are all two minutes long and all potential hits. The band gained worldwide recognition on MTV as winnersof Little Steven Van Zandt’s national garage band competition. They have tracks produced by rock legend Kim Fowley (the Runaways/Kiss) and acclaimed White Stripes producer Jim Diamond Don’t miss Muck and the Mires…they depart for a European tour directly after Artbeat!

Give their music a listen here.