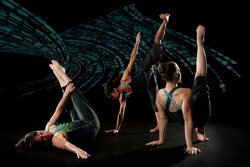 Finding a way to survive as a dance professional is a great challenge and most of us wear a variety of hats in order to make ends meet. I am a choreographer, a dance educator and a dance historian. I feel that these specialties feed each other in interesting ways. For example, the work I have done on the development of modern dance in our region (published as the Evolution of Aesthetic and Expressive Dance in Boston) has made me think about the choreographic work I do and its relevance to our contemporary world. It has also made me think more deeply about the work I do as an educator with students of dance, and in terms of audience development. Many of the challenges that our predecessors faced are still prevalent today and I can learn from that and share those insights with my fellow artists.

As a contemporary choreographer, my work begins before I ever step foot in the studio. I am often inspired by a book or scientific research and begin with a more academic investigation of a topic. Once these ideas start to percolate, I head to the studio where I develop movement material for the dance and then begin working with my company of five women. They are an extraordinary and talented group whose dedication brings the work to life. I am also very interested in working with language and often work with writers. I have spend some time researching the intersection of movement and language and I am fascinated at working with these two mediums.

My most recent project was a work called Synchronicity & The Sacred Space. Synchronicity & the Sacred Space was an investigation of human perception with particular emphasis on western versus non western ways of experiencing/interpreting the world. The piece incorporated the work of Jon Turk, a storyteller and adventurer who writes nonfiction about his expeditions by kayak. He is a world renowned traveler who has kayaked the arctic, Cape Horn and the Solomon Islands. He has explored Siberia by cross country skiing and re-connected indigenous coastal communities in Eastern Russia with those of the interior who still practice traditional reindeer herding. Jon was one of National Geographic’s top ten explorers and his work is staggering and his stories from the Kamchatka Peninsula tell a provocative tale of both the tragedy of deep cultural loss and the beauty of alternative ways of perceiving/living in the world. This work was very important to me on a personal level, as I believe that the loss of integrative thinking in terms the environment has led to powerful environmental decay and a deepening disjuncture with one another. We were incredibly fortunate to get to perform this work across the nation in Montana, Colorado, San Francisco, Alaska, and British Columbia as well as here in Massachusetts.

I am really enjoying the process of creating a new work titled Of Looms and Lilies that reflects my ongoing interest in our relationship to each other and to the natural world. This piece was most recently shown as a “work in progress” in Alaska, and I am hoping to complete it this fall. It has its roots here in Massachusetts at our own Walden Pond. Here is a description of the work:

In 1845 Henry David Thoreau retreated to his cabin at Walden Pond in Massachusetts to experiment with a life of simplicity. He kept detailed records of his environment including when the pond froze and thawed and when each variety of plant bloomed in spring. Less than 30 miles away the industrial revolution was well underway at the Lowell Mills that employed over 10,000 people, mostly women, to generate fabric for an explosion of ready-made American clothing. Today we own closets full of clothing and mass made material goods that would have boggled the mind of the average nineteenth century American.

Recent research has utilized Thoreau’s detailed observations on the plants of Walden Pond and revealed that those same plants are blooming an average of three weeks earlier than they did in 1845. It is no longer disputed that human activity is contributing to climate change, so what have we gained and what are we losing? What did these mill girls gain in financial independence, and what did they lose as they disconnected with the natural world and entered the life of dormitories and machines?

Of Looms and Lilies is an artistic investigation of the proliferation of material wealth generated by the industrial revolution and its effect on both our personal and spiritual lives and its wider impact on Climate change. It is also a simple conversation between a nineteenth century factory worker and a contemporary woman. What might they say to one another? What might they learn? 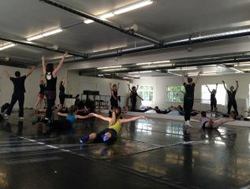 Well this is a question that comes up all the time for choreographers. Breaking even on a production is probably the best we might hope for and so fundraising on top of our artistic work is a constant necessity and distraction. None of us “gets famous” for our work and so being a choreographer feeds neither the ego nor the pocket book. So why do I spend hours every week in the studio? Why do I get up on Sunday mornings to work in the dead of winter every week? I guess my answer has a global component and a personal component.

In the big picture, I believe very deeply that art that delivers ideas metaphorically has the power to change us and to make us think outside the powerful and often overwhelming box of pop culture and consumerism. It is the radical undercurrent or counter culture to the forces that are driving our contemporary lives and offers us a moment to step out and think, feel and interact on another level. So I make dances to be a part of that counter culture and to offer my work to my community and others adding to the great sea of art making happening in communities across the nation. I am humbled and honored to be a small part of that vast network of creative people.

On a personal level, I find the choreographic process incredibly challenging and engaging. Thus far in my 25 year career, every dance I have made has taught me something that has immediately driven me back to the studio to work again. Every time I teach choreography, I am a student as well. I am amazed at the power of our bodies in motion. How extraordinary that it is this nuanced language of the body that we all share- something every human has in common!

I took my first dance class at age four and have never looked back. The early part of my career focused more on performing, but the choreographic process was always interesting to me. There are so many people that have been important to me across my career it would be impossible to list them all in this format. Instead I will share some of the mentoring and support that has been instrumental in my work as a choreographer. In the early nineties I danced for a woman named Deborah Riley in Washington DC. Our field has a reputation for toughness and sometimes cruelty that has deep roots in training and performance. Deborah was a disciplined and creative choreographer who always treated her dancers with the utmost respect and generosity. I hope I have applied what I learned from her to my interaction with my own company.

I think one of the biggest challenges for choreographers is having time and space to work. Rehearsal space costs money that has to be raised each year, so we have to work efficiently and I cannot afford the time I would like in the studio. Sometimes this means that I have to pursue the ideas most likely to produce results rather than allowing myself to investigate all avenues of an idea. So I would like to thank the very few organizations in town and out of town who have supported my process with finances, time and energy. In past years I have been funded twice by Sally Nash in Virginia to come and work on my process in uninterrupted solitude in the Shenandoah Mountains. These two fellowships were enormously beneficial to me. The Boston Dance Alliance Rehearsal and Retreat Fellowship offers funds that free a choreographer to work more deeply across an entire year. This fellowship was instrumental in helping me to finish my last work. The Boston Center for the Arts has a similar project that assisted the progress of my new work this past fall. I hope more organizations will develop projects like these in the future.

I have lived in Somerville for twenty years now and absolutely love the community. As I mentioned in my opening question, artists face many of the same issues that they have faced since the seeds of contemporary dance were sown at the turn of the century. I would love to see us join together to develop audiences, create institutions that are viable and can support working artists, and to find venues that are affordable or could co-produce dance artists. I would very much love to see a professional work/performance space in Somerville as I think it would be a tremendous asset to the city and the many working choreographers and dancers who reside here.