Joining the OPENAIR Circus at the age of 6, Peter Jehlen initially focused on stilting and tumbling. A few years later, he progressed to teaching classes, taking on stilting and stage combat and eventually taking on various leadership roles within the OAC. Peter's greatest ability may just be his ability to condense stilts, thus allowing a great amount of equipment to be stored in his small car between classes. 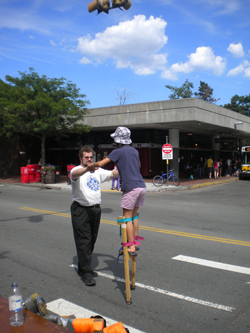 The OPENAIR Circus teaches children (and adults) a variety of performance skills.  We have our main program in the summer from late June through early August, which typically has 5 weeks of classes that meet on Tuesdays through Thursdays between 4:30 and 7:30 at fields throughout Somerville.  Each class meets for 1 hour per week, but students learn a lot in that time and have a blast along the way.  These classes then culminate in a performance where our students get to show off what they've learned.  Students also get the chance to perform in the First Night Parade and other festivals and parades throughout the Greater Boston area.

We also teach stilting, and sometimes other skills, at several local festivals.  We also have small group classes that we run by requested. We also sometimes teach after school programs, typically 1-2 hours long, once a week, for 6-10 weeks, and including a variety of skills. I oversee most OPENAIR Circus operations, including the main program, and teach several of the classes and almost all the stilting workshops.

Our 29th summer program starts June 24th, with online registration available after June 1st.  We're also hosting a fun pancake breakfast on June 28th at First Church and will have more information on our website by June.

As corny as it is, I love the community and teaching the skills.  It's so meaningful to see the reaction from students and families, the joy it brings everybody.  There's also just something amazing about watching kids you've taught go out and perform or start to teach classes themselves.  The OPENAIR Circus intentionally develops our students to be leaders who take on more responsibility through apprenticeships and teaching as they grow.  We have a great crew of teens that are taking on more and more classes, and doing an amazing job at it.

My mother, Pat Jehlen, was one of the parents in the community that helped organize the first year of the OPENAIR Circus and has been helping organize it ever since.  I, myself, started off as a student, learning a little tumbling, stilting, juggling, and stage combat.  In my pre-teen years, I began teaching stilting at events, eventually moving into teaching during the summer program, taking on stage combat and then taking over leadership of the stilting classes.  About 10 years ago, I took on the chairperson title and started playing the role of general organizer.  I've had a lot of help from Lori Manz and Pat Jehlen in understanding my role as general organizer, especially in my early years of being a chairperson.

It's amazing to me how much the circus arts have taken off in the Boston area in recent years, including several new circus groups right here in Somerville.  I see Somerville's artist community vibrant and even more varied than most realize.  Everywhere you look there's a different kind of art going on.  Open Studies, Porch Fest, ArtBeat and various other festivals throughout the year showcase the artist community, but these just scratch the surface of what organizations and individuals do.