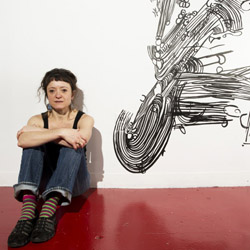 Sophia’s most recent awards include, an invitation to attend an International residency program in South Africa at NIROX Foundation, the Artist’s Resource Trust Grant, the Massachusetts Cultural Council Fellowship for Painting, and The Drawing Center Registry Program. Her work has most recently been displayed at the Kingston Gallery, Carol Schlosberg Gallery, Brant Gallery, Whitney Museum of American Art, and Spoke Gallery. Born in Johannesburg, South Africa, Sophia Ainslie currently lectures at Northeastern University.

Can you give a brief overview of what you do?
I work between drawing and painting on paper, and, directly on the wall. I work with water based mediums like acrylic, Flashe and India ink. I'm interested in relationships—body and land, absence and presence, mark making against flat paint. 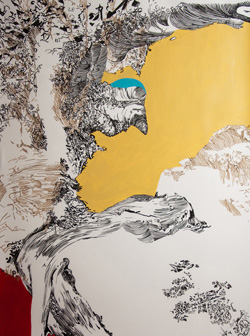 What projects are you most excited about that are on the horizon?
I'm working on a book about my parents—capturing their legacy. They dedicated their home and lives to creating a place of normality in a country gone mad. This was during the peak of the apartheid era in Johannesburg, South Africa. Within a totalitarian regime that suppressed the majority, Bill and Fieke Ainslie turned their home into an art school and opened their doors to anyone, of any age, race, or economical background with a desire to learn about art. The school filled a vital gap in providing formal art education to those who had no access to it, and became a forum—a place of dialog, discussion, and debate, using art as the common denominator. And
while on a residency at Nirox Foundation in South Africa in July last year, something new presented itself in my work. I'm still in the process of investigation, and seeking out exactly what it is, but I'll have some of this new work in a group show, curated by Robert Moeller at the Lincoln Arts Project in march this year. I'll also be participating in a group show of wall drawing at Gallery Naga in June this year.

A profession in the arts can be difficult. Can you talk about some of the challenges?
Time and space are always a challenge. There is never enough of either. 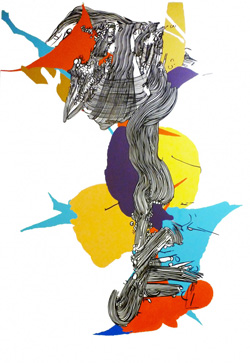