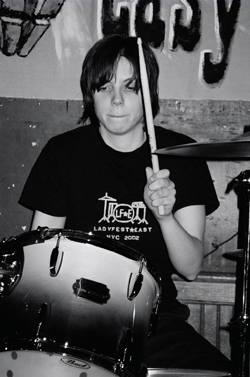 Stephanie Melikian is a Somerville-based musician and instructor. She's been in a number of bands over the years, and is involved in both Girl's Rock Camp and Ladies' Rock Camp.

I'm chiefly a drummer, and sometimes also play guitar or bass depending on the band I happen to be in at the time. My main thing currently is playing drums in my brand new band, Weather Weapon, with another amazing Somervillian, Gilmore Tamny. We are a drums and guitar duo but may be adding a bass player at some point. I am also a drum instructor and band coach for Girls Rock Campaign Boston at both the girls' and ladies' camp sessions, and also help year-round as part of the GRCB gear acquisition and maintenance crew, acquiring and fixing up instruments and amps and such. GRCB is an amazing all-volunteer non-profit working to empower local girls to believe in themselves by providing a supportive community that fosters self-expression, confidence, and collaboration through musical education and performance. It's fantastic and something I'm very passionate about.

I've played drums and/or guitar in numerous Somerville-based bands (The Operators, The Tardy, The Quincunx, Zbornak, Sister Spaceman, et al). My longtime band, the Operators, is mostly on hiatus these days but we do play the occasional reunion show. I also was a founding member of the Handstand Command collective, which was based in Somerville in the 2000's. We booked a lot of local music nights at places like the Abbey Lounge, PA's, the Dilboy VFW, ArtBeat, etc, and also put on the Bazaar Bizarre punk rock craft fair at the Dilboy its first couple of years.

Is there anything new you’re working on?

Weather Weapon will be recording a bunch this summer – keep an eye on our Bandcamp page - and we'll certainly be playing out here and there. The Operators will be playing a reunion show in August to benefit Girls Rock Campaign Boston. GRCB holds sessions in July and August and the girls' bands perform at Brighton Music Hall at the end of each session, which is pretty much the highlight of my year. Later this year I will also be recording some cello tracks for an album of Middle Eastern music with my father, who plays the oud and gigs regularly in Worcester with the Ed Melikian Ensemble. 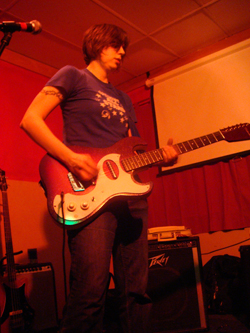 Playing music is such an outlet for me, I can’t imagine not doing it. It's not a hobby, it’s part of my identity. A big part of what I love about playing music is the excitement of joining forces with others to create something brand new to the world. The collaborative aspect of being in a band and creating something that is greater than the sum of its parts is what is most fun and rewarding to me. Plus, getting to play with other great bands and meeting nice people at shows is a nice perk! Volunteering for Girls Rock Campaign Boston is like all of that multiplied a hundred times over. It's amazing and so rewarding!

Seeing my father perform throughout my childhood was certainly a major formative experience. I owe all credit for the beginnings of my musical career to my parents for signing me up for the free music lessons provided by the Worcester public schools. I had amazing music teachers in high school, where my love for ensemble playing really developed. When I moved to Somerville in 1999, my first friends here were in a band together called the Operators, and they asked me to play guitar with them even though I'd never even held a guitar. I had secretly always wanted to be in a rock band so of course I said yes, and never looked back. And I'm doing my part to pass that along to the women and girls who attend Rock Camp.

Pretty much everything I've been involved in has been totally DIY and would not have been possible without there being people around that would make handmade posters, lend equipment, put up flyers, and the like. I feel like that supportive, collaborative community really is the signature of the Boston-area creative scene, and of Somerville in particular. The myriad arts organizations and density of full-time artists as well as people who, like me, do creative things in their free time because they love it are what makes this such an interesting and fun place to live and create and really makes Somerville awesome!