Annie Silverman is a relief printmaker and book artist who for over 20 years has been creating experimental work with print installations, dimensional objects and books. In 2008 she formed ABRAZOS PRESS with Sandra Butler and Nina Wishnok at Miller St. in Somerville, MA. Annie teaches Artists Books and relief printmaking as a part-time instructor at Massachusetts College of Art and Design in Boston. Her work has been exhibited nationally and internationally, most recently as part of the Al-Mutanabbi St. Starts Here Project in 2013 in Manchester, England, and in ALL THINGS GRAPHIC in Utrecht, Netherlands in 2012 along with her Dutch partner in art hijinks, Wilma Vissers, who she met while in residency at CLO’ in County Donegal, Ireland in 2010. 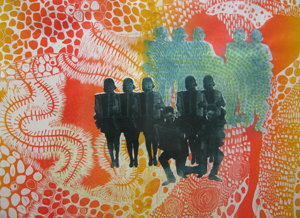 I am a printmaker and book artist who working primarily with woodblock printmaking, a relief technique. I am a teaching artist who owns a small print shop in Somerville, ABRAZOS PRESS which is both a teaching and professional studio where classes and workshops are offered. ABRAZOS means HUGS, or EMBRACES in Spanish, and it’s my hope that people will find a warm and stimulating environment to experiment with printmaking as an art form. I started ABRAZOS Press with Sandra Butler and Nina Wishnok in 2009 and we have found a good home at the Miller St. Studio.

The Dictionary Project was exhibited at Brickbottom Gallery in around 2007 and was a project with 65 artists from 9 countries and many different states. I found an old Dictionary on the street across from my house and sent pages to people to work on or be inspired by. It was really a project in friendship networks because people, who liked the idea, asked if their friends who were poets or artists could be involved and I always said yes.  I would love to do that one again, but also include writers along with visual artists.  The last invitational Windows Art Project happened when I was starting to get interested in doing Print installations, and Hannah Merriman and I did a very bird, nest and egg infused window in JJ Sullivan Plumbing Supply in Union Sq.   I have been working with issues about Vanishing Pollinators: bees and Hummingbirds for several years and my installation around that topic was shown last year at the Boston Public Library as Part of MIXIT Studios 25th anniversary exhibition.

I have also had the opportunity to teach, exhibit and have residencies in Ireland and Denmark.  In Ireland I met a Dutch artist, Wilma Vissers with whom I have done a collaborative book project that has traveled back and forth across the Atlantic ocean and been shown both here and in Utrecht, Holland.

I will be teaching classes this Fall at Abrazos Press in Improvisational woodcut and the Mixed media print, but the NEW THING is a Book Making, Traveling workshop with Eli Epstein of Union Press Prints.  We will have a workshop where people will be making artist books and postcard sets that will be letterpress printed and printed with woodblocks that participants carve.  The class will travel to both studios.  Stay tuned for specific dates and times later in September. 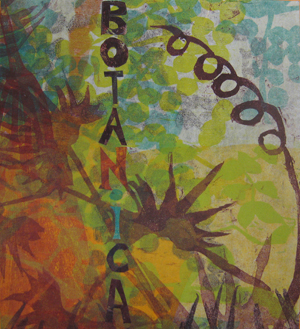 I love the process of carving and printing woodblocks. There is something so archaic and elemental about it that belies the instant, digital time in which we live.  I joke about being Analog Annie, and about being part of the SACRED ORDER OF THE HAND, but last winter when I saw an exhibition of ICE AGE Art from over 20,000 years ago at the British Museum in London, I felt a strong kinship with those long deceased makers through what my hands can make. It was a strangely comforting feeling.

There is a historical connection to people making and reproducing images that goes back to the beginning of certain types of communication in which printmaking was a key component. Globes, maps, scientific illustration and religious imagery were all printed at one time from woodblocks. I feel connected through my craft and hands to people across time and around the world.

I never thought about printmaking much until I saw a flat rolled surface of a turquoise green blue called thalo viridian when I was teaching papermaking at Art New England at Bennington College in Vermont in 1987. The color stopped me in my tracks across the printshop. My eyes and hands became hungry to learn about that flat inked color.  A few weeks later Bernie Toale, then of Rugg Road Paper bought a printing press and offered a Monotype class. I took it and was launched in a totally different creative direction from where I was going, and I have not looked back.

My mother, Helen Silverman, died in January of 2013 and was the generous benefactor of the lovely Takach Printing Press around which our studio is organized.  She called it THE PRINTING MACHINE.  My big break was having such a mother for 94.7 years.

Thoughts on the local Somerville, or Boston area creative scene? 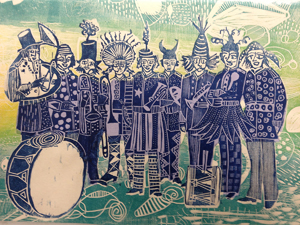 I feel positively nerdy in my Somerville Boosterism in terms of the amazing and quirky cultural hub it has become since I have lived here since the late 70’s when the city was often was called SLUMERVILLE. My favorite holiday and time of the year is the HONK festival. I have hosted bands in my home since the very beginning and am a very happy volunteer. I have also made a HONK print from the rejected T-shirt design from last year’s festival and have been selling them and will donate some of the proceeds from each print for this year’s festival.

I like the mix of professional artists and enthusiastic people who want to live in a vibrant, urban environment and make Somerville’s streets hum with energy throughout the year. I think the NAVE , SAC and Union Sq. Main streets provide “great bone structure” for much of the cultural life that makes me proud of my town.  A few years for HONK, I hosted some of the Italian bands from Rome at my house and then had the chance to visit them last year. They still were so grateful for the kindness that people in the community showed them and how generous the town was to musicians from near and far.  It just keeps getting better and better here.