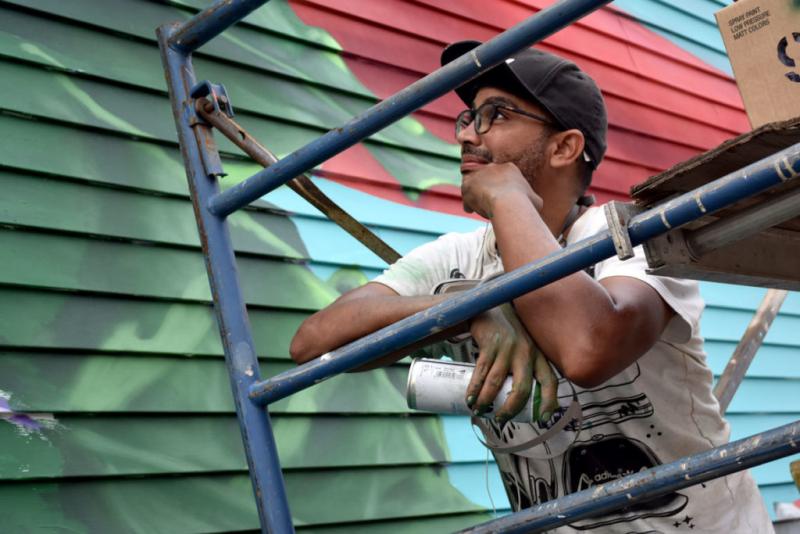 Angurria is an illustrator and art director from the Dominican Republic, with more than 18 years in the advertising industry in the DR. He has excelled nationally and internationally in the area of design, typography and lettering. He has represented big brands, driven by his particular way of expressing himself and creating frank connections with the public and his followers, thus making the Adidas brand a vital part of his image in his home country. He has taught courses for the School of Arts of Chavón, APEC University, Brothers, Centro Leon and Creative Box. He has created well-known series of "Doña Patria: Dominican Beauty" with which he has participated in activities such as Design for the Kids, Wallride, Rayaera, Artesano Project, Provocadores del Caribe, Transitando Art, Hoy Santa Barbara, Hoy Villa Francisca and the events of Muralizando RD.

Mural, 112 Broadway: Angurria's mural "Doña Patria" represents Dominican culture. The mural is an expression of Dominican women's everyday beauty. Hair rollers are a huge part of the culture but they are worn behind closed doors. Angurria knew about them from spending time in the hair salon that his mother owns. The mural is in honor of his mother, who was a hair dresser, and all of the women of the Dominican Republic. Preparing your hair in rollers is something that many Dominican women do but it is mostly done in private and Angurria wanted to show that to the rest of the world. The coffee being poured for the woman is a role reversal from women serving men.