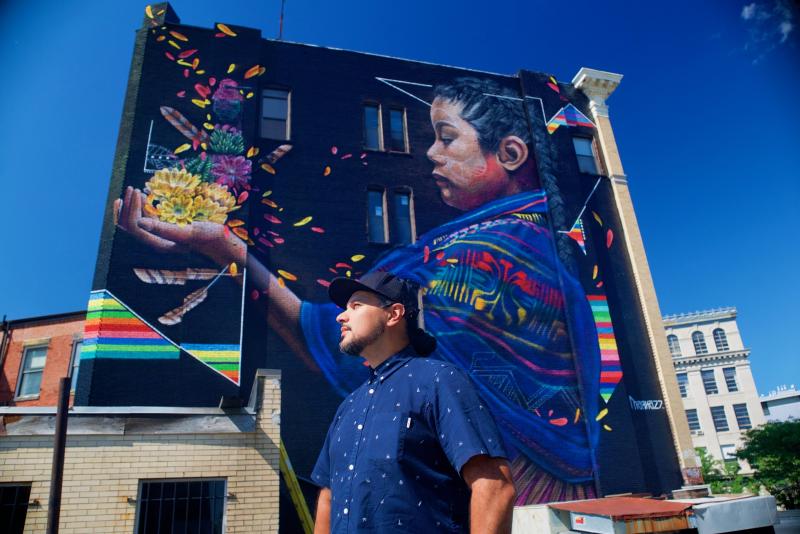 Victor "Marka27" Quiñonez: Marka27 is an international street artist who works at the intersection of graffiti, vinyl toys, contemporary art, fashion and design. With paintings, murals, drawings, mix-media pieces and commissions for major brands, his robust palette blends elements of street and pop culture with Mexican and indigenous aesthetics—a signature look the artist has coined “Neo Indigenous.” Marka27’s work has become part of graffiti and street art history, but he has flourished as a product designer, gallery artist, toy designer and more. Marka27 has emerged as one of the most sought after muralists in the world, mastering his craft since before “street art” was even a term.

He currently splits his time between his studio in Brooklyn and home in Cambridge, where he and his wife and creative partner, Liza, run their award-winning creative agency, “Street Theory."

Mural, 2 Union Square: This mural "Rebirth" pays homage to Mexican culture and folklore. The masks are 900 AD Mayan masks representing life, death, and the lifecycle of being reborn again. At the center of the mural is an indigenous Brazilian child, honoring the "Munduruk" tribe to pay tribute to Somerville's large Brazilian population. This mural is a representation of Marka's "Neo Indigenous" style.