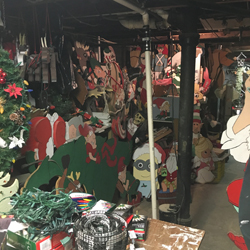 It’s unclear if it’s best to describe Lenny “Iggy” Rigione, the Somerville Arts Council’s December Artist of the month, as artist, DIY role model, local celebrity, family man or Somerville treasure. Lenny’s decorations for the holiday season (and, increasingly, Halloween), have become a staple in Somerville for many years now, with people coming from miles around to admire the tableaux on his family’s home on Central Street.

But his motivation clearly lies in the joie de vivre he brings to others, “I enjoy it, when I go outside and hear a kid laugh, saying, ‘oh wow!’,” Lenny said. “I don’t do it for money or the pats on the back, it’s because of the kids.”

Unlike many other people’s holiday decorations, especially those who decorate on the scale Lenny does, he creates most of them himself. The works that wind up on the porch or on the lawn each December are individual pieces of art—wood cutouts, often mechanized to wave, etc.—of Santa, elves, reindeer, et al, which Lenny cuts, draws and paints himself. He often recycles materials and is “willing to use whatever is handy”—paint, wood, metal. He also does the mechanizations himself, cleverly rigging out his waving snowmen or Santa by way of a windshield wiper motor. His workshop is positively crammed full of projects past, present and future. 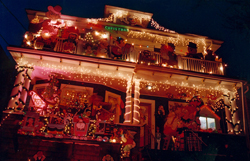 Lenny considered going to art school at one point, but, as it is said, life happened. He also had a chance to work with Al Capp of Li’l Abner fame, but was not attracted to NYC.  “Kept doing it on my own,” Lenny said. And how!

I asked him about the technological innovations in holiday decorations he’s seen since he started, as there’s been the advent of the twinkle lights, LED lights not to mention the new giant blow up figurines. As to the blow-up figures, he expressed some appreciation, but so far he seems unphased by the lights, perhaps as his passion really lay elsewhere, in the things he makes. “Makes no difference to me,” he said about twinkle lights. “Lights—they look nice, but that’s all.” 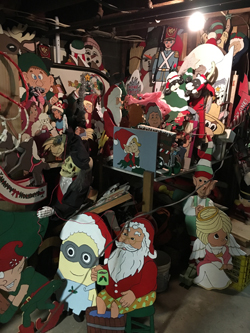 Holiday decorating is part of a family tradition for Lenny. “Yeah, my parents always did that. We decorated and everything. Me and my sister,” he said. As to the creating end of his works, Lenny said. “My father taught me how to trace things, that’s how I learned.” Eventually the tracing turned to drawing and now he uses his skills for his pieces.

I asked, half-serious, whether Christmas was his favorite holiday. He agreed but added: “Halloween is all right too,” he said. “I decorate for Halloween too.”

I was joking with Lenny about the possibility of neighbors getting in arms race of holiday decorations. With what one might call uncharacteristic generosity among artists, Lenny said, “I don’t try to do anything better than you, because whatever you do is what you do and that’s fine with me,” he paused. “I really enjoy seeing people put something up.”

When asked if he had an particular edict as the December Artist of Month: “enjoy yourselves.”

Interview as told to Gilmore Tamny.  If you want to view Iggy's home come out to the Council's Illuminations Tour on the 19th or visit 166 Central Street.