Interview with Athena Moore as told to Kerrie Kemperman. 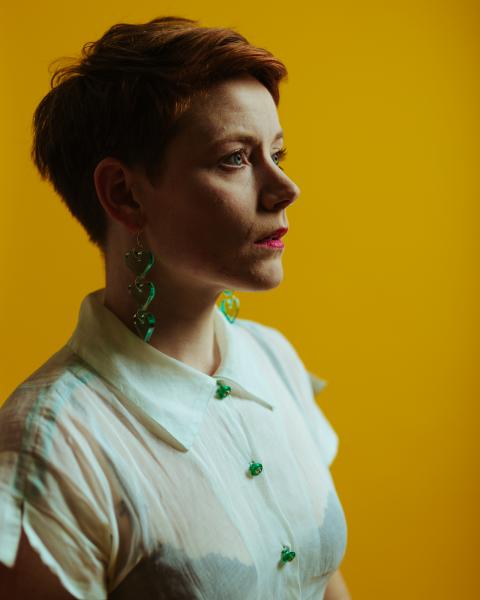 Please tell us about your background, and how you came to work out of Washington Street Art Center in Somerville.

I lived in Union Square for about 8 years and loved it. I attended the North Bennet Street School’s full-time Bookbinding program just before moving there and was drawn to the neighborhood in large part by the vibrant art community and the volume and output of the many artist spaces. I was friends with folks who had space at Washington Street and found myself attending or participating in a bunch of their shows once I lived in the area and eventually, was inspired to see about landing in a studio there. I love having an art-specific space to focus in – I’m easily distracted at home, making it especially hard to focus creatively, and I benefit from separating the two spaces. It’s helpful for me to take what's in my brain, make a mess, and have the freedom to leave it…to let it marinate a bit.

Please describe your art and your approach to it.

I tend to put the focus on my art being approachable and accessible. I respond to tactile experiences and have a deep appreciation for and curiosity in materials, so this is certainly part of it – I want for my pieces not to end with me, but to continue on to the person who is interacting with them. Having been trained in historical binding methods, a lot of the work I did for a long time was beautiful, but so fraught with the emotional and literal sweat that I’d put into perfecting each piece that the notion of someone handling them left me ill at ease. I realized that these objects were precious, but couldn’t be appreciated fully sitting in a box on a shelf, away from light and eyes and hands. I also recognized at a certain point that when I would take someone who exists outside of the book world to a book exhibition, that most of what they experienced was…a lot of books. Without the intimate knowledge of what it takes to pare leather, or perfect an onlay, or get the tooling just right, a lot of the art and craftspersonship was lost on the audience. I don’t think any of us expect an art appreciater to understand every element of the form itself, but this felt particularly niche, so the notion of accessibility became that much more important to me.

What drew you to book-binding? And to the more sculptural aspect of the book form? 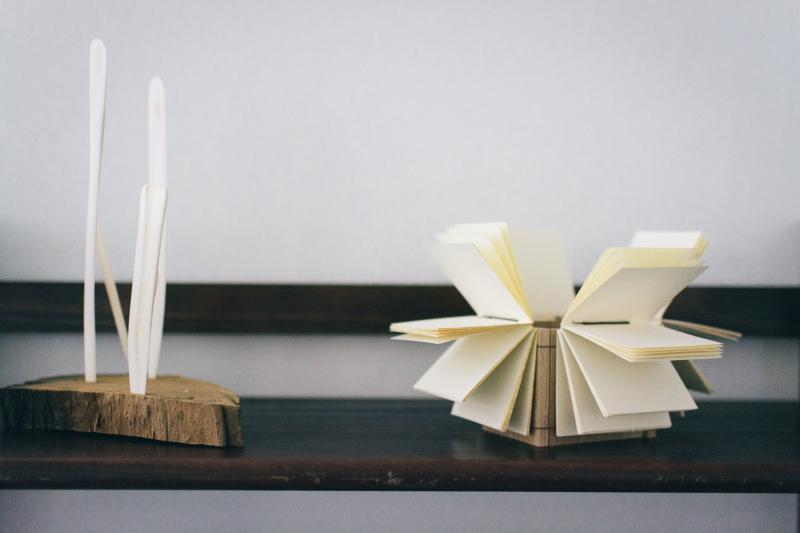 I discovered bookbinding somewhat by happenstance. All of my friends in undergrad were art majors, and one semester my friend Lis did a short course on the form. She taught me what she knew and I made an absolutely horrendous book, but I loved it. A couple of years later I was in between jobs and took it back up to re-learn. I did some crude self-teaching, gained a little bit of skill, and eventually discovered the NBSS program. I fell in love with the energy of the school and spent every moment I was there learning what I could about the form. I’d always been enamored with books as a source of delight, escape, and thought, but in spending time with their history, came to appreciate them even more as unique historical artifacts. I worked for years as a book conservator and encountered some truly special objects during that time – having the opportunity to hold (and, unbelievably, work on) things like a Shakespeare first edition or an incunable in its original binding gave even further depth and appreciation for materials and dissemination of knowledge over time. [Ed. note: An incunable is a book printed within the first 50 years of the invention of the printing press, before 1501.]

The sculptural element came out of some of my previous notions of accessibility and the tactile experience, but also from a place of asking myself what a book is, or what it could be. I like to exist in a space that’s challenging, so pushing myself to work with mediums I don’t normally or attempting to apply a historic method in a way that isn’t really intended for it is especially exciting. 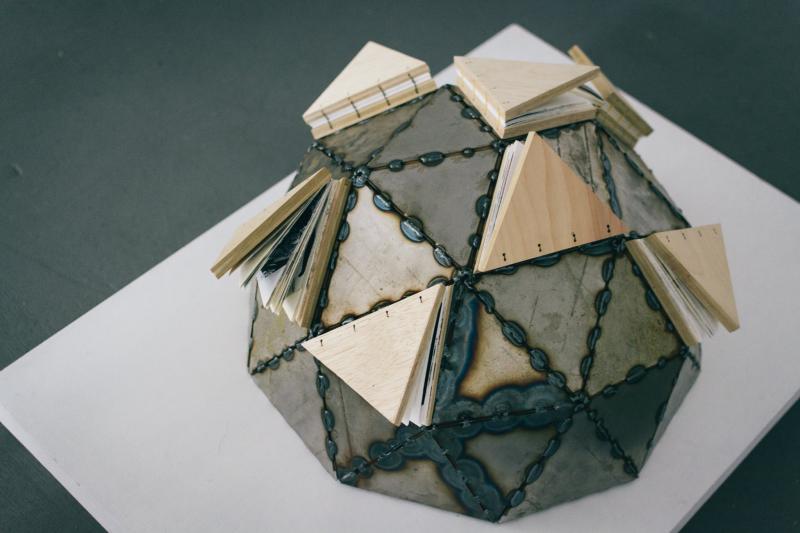 Describe one of your recent projects and what excites you about it.

A piece that I worked on somewhat recently was largely born out of a pun, which I found to be hilarious. I was half asleep one night, thinking about Buckminster Fuller (as one does), and I drifted across the thought of “Bookminster Fuller”. I decided the idea had legs, so I went about trying to create a mock-up of a geodesic dome. I realized that I hadn’t fully appreciated how much math played into this and had to quickly reacquaint myself with geometry. My mock-up was paper, a material I work with all the time, but not one known for its durability. I pivoted mentally to making this dome out of metal, but had no background on how to do that. Ultimately I learned to weld (again, quickly) and ended up with this large shape that I adorned with magnetic triangular books. Once I exhibited it I had the double delight of watching people play with and move the books themselves and giggle at the piece’s title.

Where can people find your work? IMAGINE, May Artist of the Month Franklin and Dennis Wright, January Artists of the Month