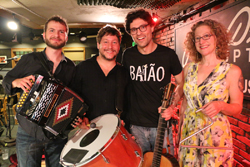 Forró Zabumbeca specializes in forró, the infectious dance music of Northeastern Brazil. Concentrating on the instrumental forró style known as "pé-de-serra" popular in the states of Paraíba, Pernambuco, and Ceará, Zabumbeca has been rocking dance parties in Boston since 2014, and will be making their first appearance at the Squeezebox Slam this year.
.

At the center of Zabumbeca's sound is Paddy League's "fole de oito baixos" or eight-bass diatonic button accordion, which links instrumental forró to the social dance traditions of Ireland, Britain, and Western Europe. The violão de sete cordas (seven-string guitar), played by Adam Bahrami, adds the harmonic acuity of choro, samba, and jazz, and percussionists Kenny Kozol and Catherine Bent bring the swinging Northeastern groove on zabumba (bass drum), triangle, and pandeiro. Zabumbeca's set at this year's festival will concentrate on original compositions based in the forró tradition, and is sure to get you moving!