All are welcome and encouraged to join the Flip Parade led by the School of HONK! The parade will kick off at the Elm Street Stage at 5:15 p.m. and will snake down Elm Street to Seven Hills Stage. 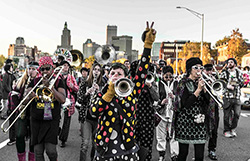 is a street band tradition uniquely conducive to bringing out the musician in everyone, offering a powerful revival of collective mind-and-body experiences dating back to the dancing, wailing and drumming that healed and united peoples, before language, before history itself. Before there was the story, there was the song. The activist brass street band, especially, expresses all manner of human emotions, from the most powerful calls to justice, to the most clever and beautiful visions of self-parody. The music is kinetic, “on the move,” and the street band’s mobility, agility and spontaneity allows it to create these moments when people least expect it, instantly disarming onlookers of their fears and distractions, to experience an awakening in themselves of authentic human connection. Everyone, free to choose however they want to join in, just for fun.