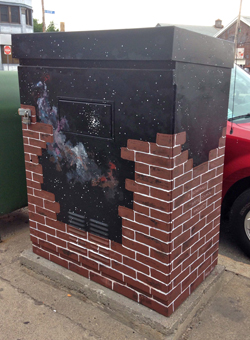 The design for this switchbox combines historic and futuristic imagery. An old brick façade is paired with a view of space, and can be interpreted as either obscuring or revealing that view. One side of the box depicts an image taken by the Hubble Space Telescope, which celebrates the 25th anniversary of its launch into orbit this year. If you follow the stars around to the other side, there is a constellation of Somerville itself with stars marking the outline of the city.

I regularly incorporate surrealist elements into my art while including familiar objects or scenes that ground it in reality. At first I was a little self-conscious about painting in public because it is usually a solitary process for me, but it was fun to talk about the project with all the regulars at Kelly’s Diner as well as the many people passing through Ball Square.   ---Audrey Davis, June 2015 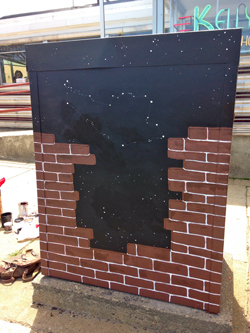