Has anyone seen a lost goldfish!? 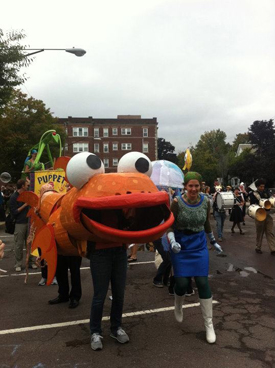 This puppet-filled outdoor performance adventure takes audiences on a search for Goldie, a fish who went missing from her fishbowl without a trace. Get clues from other aquatic friends, sing-a-long with a pirate, and help transform Glen Park into an underwater seascape!  This interactive piece combines giant puppets, music, and more in an adventure of oceanic proportions.

Puppet Showplace Theatre is New England’s premier presenter of puppetry arts. Founded in 1974, the theatre annually presents hundreds of performances by nationally recognized puppeteers in its Brookline Village location and on tour across the region. Through its “Incubator” program, PST collaborates with local artists to create new works for the puppet stage. “Goldie” was created as part of the “Think Big” giant puppet class taught by PST’s Artist-in-Residence Brad Shur, and received a public performance during a Puppet Showplace Slam.