Home > Inside-Out Gallery > "Get In My Shoes", curated by Jen Harrington 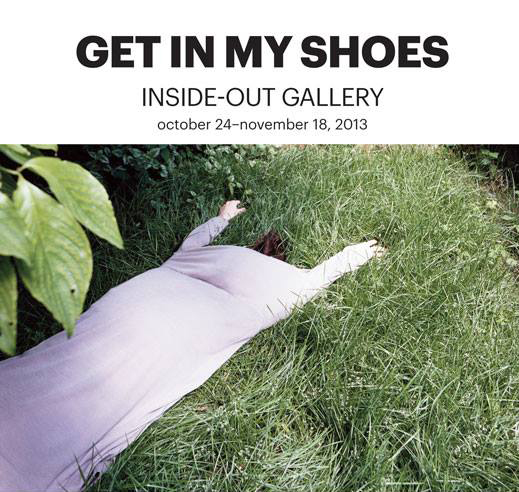 GET IN MY SHOES

“The difficult thing isn't living with other people,
it's understanding them.”
—José Saramago

Braving a delicate walk with empathy, narrating stories to which we tend to turn a blind eye, “Get In My Shoes” presents four artists with work devoted to the consideration of stepping into the shoes of another.

In the photography series "Stories," Anastasia Cazabon takes inspiration from fairy tales and folklore to examine themes of young women stuck or constrained in their environments. A photographer and filmmaker, she is a graduate of Massachusetts College of Art and New England School of Photography.

In the photography series "Other People's Clothes," Caleb Cole begins with an outfit or piece of clothing (either bought, found, or borrowed), builds an identity to fill those clothes, and then constructs a scene for that person to play out a silent moment alone. He is the winner of the 2013 Hearst 8x10 Biennial and the 2011 St. Botolph Club Foundation Emerging Artist Award as well as a 2011 Massachusetts Cultural Council Fellowship Finalist. Cole is represented locally by Gallery Kayafas.

In the photography series "Auténtico," Robert Gallegos explores the complexities of his Mexican-American identity, using photography to better understand his cultural heritage and place within it. He is a Boston based photographer and 2012 BFA graduate of the Art Institute of Boston.

In the documentary film, "Keeping Pappy Happy," Stebs Schinnerer chronicles his grandparents, married for 62 years, as they struggle with his grandfather's Alzheimer's. He is the Director of Paper Fortress Films in Union Square.