We are thrilled to announce a national first: a local arts council is opening a restaurant! The restaurant, called Nibble Kitchen and located at Bow Market in Union Square, Somerville, will feature an international menu featuring chefs from Somerville’s rich immigrant communities. The menu will rotate day by day, and includes: Venezuelan arepas, Ethiopian wots, Brazilian street food, Bolivian cuisine and delicious Bengali fare. Only in Somerville, Massachusetts will you find such an innovative concept and a menu so adventurous and diverse. 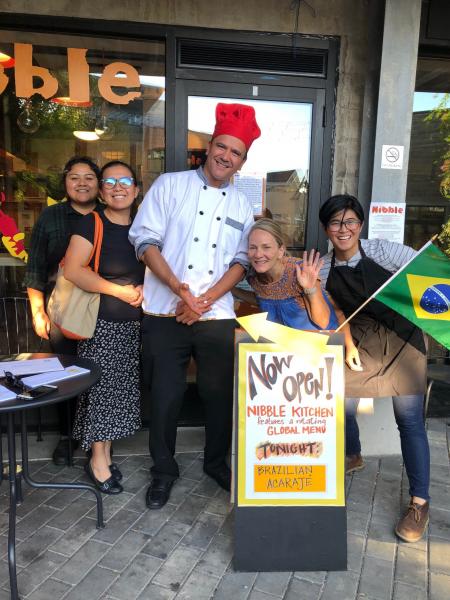 “Nibble Kitchen restaurant not only supports culinary entrepreneurship and multiculturalism through food,” says Somerville’s Mayor Joseph A. Curtatone, “the project also reflects our city’s steadfast commitment to being a sanctuary city.  Here in Somerville, we not only support our immigrant communities, we acknowledge how they fuel the economy—especially the local food economy; Nibble Kitchen both reflects and supports this fact.”

Like the overall Nibble initiative, Nibble Kitchen has a strong social justice and economic development component. Our entrepreneurs are predominantly female, and hail from our immigrant communities. Nibble Kitchen will allow them to test out restaurant concepts in a low-risk environment before launching independent businesses and share their cultures via food. Finally, Nibble Kitchen aims to keep Union Square deliciously diverse and thus plays an important placemaking role. Please visit our Press page for media coverage so far.

Soft Opening now until Dec. 3    Although our official opening is Dec. 3rd, we are open for business now, testing out menus and streamlining our systems. This is the perfect time to come check out our delicious global fare and offer your feedback! See our MENU here.

Tasty Nibbles at the Grand Opening; Fir fir anyone?

On December 3, from 6-7:30pm, from we will officially open the restaurant with a public celebration and ribbon cutting. Each of our Nibble chefs will offer bite-size morsels — just a nibble! Until we run out, we’ll offer samplings of Venezuelan Arepas, Brazilian Acarajé, Ethiopian Fir Fir, and a Bengali Ghugni Salad. The idea is to whet your appetite so you’ll come back for more another day! There will be music, dancing and a Nibble tiger serving a hot Bolivian peanut drink called Chicha de Maní. Because we are offering small nibbles, we also invite the public to explore all of Bow Market by sampling other restaurants’ fare!