Interview with Hilary Scott as told to Matt Kaliner; photography by Stratton McCrady 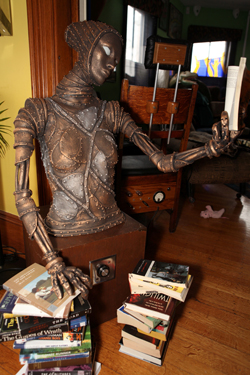 A simple question that has stumped a lot of people.  Am I a photographer who sculpts? A sculptor who takes photographs?  Certainly, the photography clients could care less that I share my house with giant robots or have large octopuses coiled on my ceilings; and I find that the people who come looking for the dinosaurs and dragons tend to ignore the photography.

The thing I’m not, is a person with any type of formal art training on my curriculum vita; something which might have given me the vocabulary to put a label on what I do.  My adult daughter calls me an artistic adventurer with every project being the entrance to an unexplored cave.  Add to this the five-year old son of a client, who once said, “Dad, I know what Hilary is:  He’s a Maker!”

So, between the two of them there’s something that seems to work:  ’maker’ is often synonymous with problem solver, and an adventurer is always looking for the new and wondrous.


Are there some past projects you’d like to mention in more detail?

For photography, the past six months have been pretty fun, with Turner Broadcasting, the Kennedy Center, and the Getty museum licensing my photographs for their tributes to John Williams, James Taylor, and Yo-Yo Ma respectively. 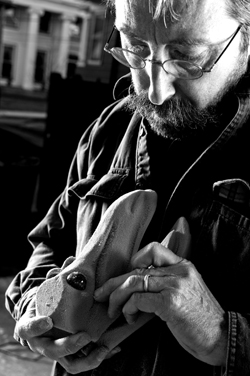 For sculpture, 2015 had me doing a stint as artist in residence at the remarkable Kingswood Oxford school in Connecticut, as well as building a multitude of Buck Rogers inspired rocket ships for the ever-popular Pandemonium Books in Central Square, Cambridge.

And the past year wouldn’t have been complete without some challenges posed by SAC: Trying to figure out how to bring water filled lagoons to Union Square for the Tiny Tall Ships Festival, as well as a chicken sized replica of the Prospect Hill Monument to the Somerville AgriCultural Festival.

A new Boston Symphony season means a lot of time spent crouched in the organ loft of Symphony Hall or silently trying to be invisible at the side of the stage.  I’m excited about a new project at Somerville High School this spring - working with May Chao on a studio arts course involving myths and legends from around the world.  In June is the annual migration to the Berkshires for the beginning of the Tanglewood season.
Sculpturally, the Christmas T-Rex burst onto the scene for the holidays . . . he was a foray into the use of cardboard and online design schematics.  He didn’t mean to end up 10 feet long and 5 feet high . . . but you know how these things can happen.  At least he leaves you gifts and eats your enemies.

For the sculpture, I always credit my wife and the birth of my children.  Children rarely want a parent who is tied to a computer keyboard, something that full-time teaching, my job twenty years ago, demands.  Children want you to interact, and better yet, to create; and once I decided that I should have a creative say in the toys my children played with, it’s a slippery slope.  If I demanded more from ToysR’Us for my kids, shouldn't I have the same attitude to my own adult surroundings? My wife helped: Why settle for Pier One when everything from headboards to electrical outlet covers is an opportunity to create, and save money? A unique towel rack here, a creative set of cabinets there, and “Oh, hey, how about stained glass for these windows. You can do that, can’t you?”  My answer became a mantra I still use with clients: ‘I’ve never done it, but I don’t see why not.’ 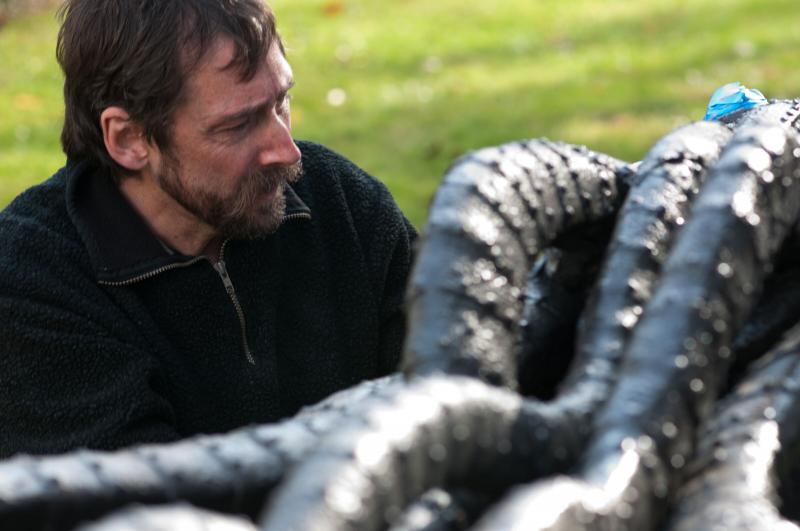 As with any vocation, it changes over time.  When I first started, it was the pull to explore the new.  Now, I suppose it has a lot to do with spirits:  My father was a professional photographer, and my grandfather was a professional puppeteer.   Growing up in a photography studio my father taught me to frame with large format camera.  Now I use a digital camera, which has capabilities he couldn’t have imagined. Yet, when I look through the viewfinder, my eye is still governed by his lessons in composition.  Likewise, my grandfather was limited to balsa wood and black carpet thread, were my studio is full of polystyrene, silicone and epoxies.  Yet when I’m sculpting, while I’m physically in the second decade of the 21st century, my brain is back in 1930’s America, a time when making things was honorable and going out to a marionette performance was considered a pretty good date night.


Any thoughts on the local Somerville, or Boston-area creative scene?

Somerville is awesome and always has been.  I came here 30 (yikes!) years ago to go to Tufts and chose to stay and raise a family here.  It was a different world then, but to see the evolution of a city has been amazing.  Of course, I would love to get a plug in for Somerville Open Studios (SOS) 2017 which is coming up on the first weekend in May.  I was part of the first SOS in 1999 and never left that either and who knew it would become one of the largest open studios events in New England!

Most people don’t realize that we are a non-profit organization and the planning and logistics of this city-wide event take almost a full year to put together by a group of extremely dedicated volunteers.  Artists register for the event by signing up and becoming members of SOS – and registration for the event actually opened on December 15th and will close with a snap on January 31st!  Then follows the arduous work of putting together the physical map book that guides thousands of visitors to the over 400 individual artists’ studios spread throughout the city, as well as securing sponsors, mapping trolley routes, and the hundred and one things that make for a fantastic weekend and show off Somerville to its best advantage.