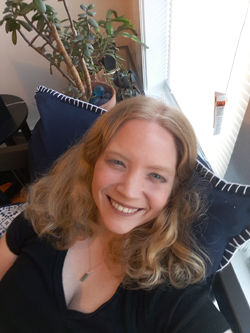 An interview  with Erika as told to Gilmore Tamny

Please tell us a bit about your work.

I'm a musician focusing mostly on fractal music at the moment, which is music similar in spirit to visual fractals such as the mandelbrot set, but at least in my case not made directly from them but by a similar mathematical process.

Have you always wanted to be an artist?

I have always been casually creative in various ways and thought I might be a professional cellist at one point as a teen. But I felt something blocked me from really being an artist. I guess the notion that I wasn't an artist bothered me because I felt I had some idea or aesthetic I wanted to express but I guess it wasn't fully formed. Now I seem to be an artist, that appears to be a thing that is happening.

Generally speaking, unless they grew up with it around them, by way of parents or artistic communities, artists tend to come a little later to experimental music. If that’s indeed true for you, could you describe how you found your way into playing experimental music? Or, if it’s always been there in your life how you became an active performer/player/composer?

A noise musician in Philadelphia found my stuff on soundcloud a couple years ago and had to come out to Boston to do a show with me. I thought he was nuts. But he is pretty cool and we did a couple of good shows. A lot of people have helped me along the way.

How do you make time for making music? Do you have a particular routine?

For a while I didn't watch TV or anything but literally spent all my spare time on music, staying up late routinely. It was not discipline but addiction like a really good video game except you end up with art at the end. 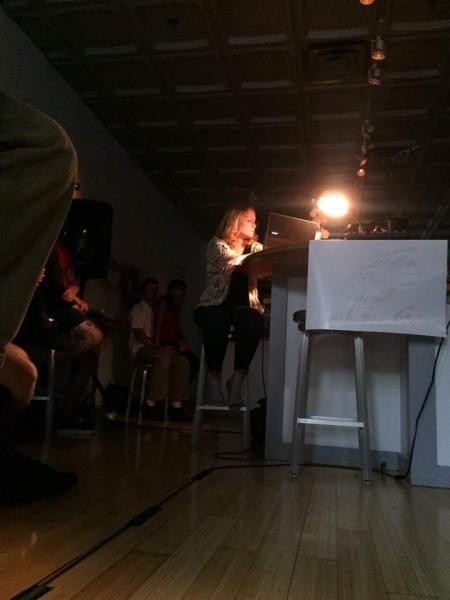 How can you tell when you’re finished with a piece?

I play slight variations of things over and over for hours, and collect up the best ones to compare. I am never sure if something is really a keeper until I listen to it later at work.

I assume that your ideas are generated and plugged into your laptop—and then see what comes out. Is that right? Do you ever work the other way round—have a sound you try to figure out how to generate the formula?

There is a lot of work still to do in this area. Fractal music is something that has not at all been explored to its fullest. I am not quite sure why; people have made various attempts at fractal music with a variety of algorithms since fractals have existed, but with much less popular success than the images, despite the fact that music is known to have fractal properties. I feel that this problem still has not fully been solved and the stunning Mandelbrot Set or Dragon Curve of fractal music is yet to be created.

Did you come at the fractal music by way of math or music or computers or all of them?

All of them. I was always into music, was a professional developer, realized one day it was not that hard to make a sound with basic math on a computer which fascinated me, that literally graphing a sine wave and saving that in a certain format comes out as a sine wave sound. I just decided to see what I could do with that and added basic fractal/recursive math which I happened to know about from general curiosity about such things.

It is interesting although not necessary to know that I work with something like a seed crystal of musical pattern that expands through making multiple copies within itself into a piece that has a kind of wholeness to it. There is a lot of nonsense about "is it art" with computer-generated art (do we need to go through this with every medium?). I am pretty thrilled with the reception this music is getting, it appears to definitely be art.

How do you deal with show nerves presuming you experience them?

I am actually pretty chill about shows. I keep telling people all I'm going to do is press a button and listen with everybody. They invite me out anyway. I thought it was nuts at first but it seems to work.

Once I opened my laptop and it started playing a track I hadn't intended. That was about half the concert. It was a good show.

I was into minimalism for a while, Steve Reich, Philip Glass, Terry Riley, Alvin Lucier, I'm very sure this has been a big influence in leading me towards both the aesthetic of texture-based music and the idea of process music. I wanted to make noise music for many years after seeing Birchville Cat Motel at an Intransitive Recordings show at first night: now I play whatever it is I make at noise concerts, so there you have it. I use Gangnam Style as a sound check. I have a lot of respect for good sound and beat in pop music and want to find ways to have better production in my work.

How does your job influence your work—or vice versa?

My job and my work both involve computers and programming. My job is much more focused on technical details, while in my work I try to get past that and into playing with ideas and sounds as much as possible, but being a professional developer certainly helps get me into that space of getting from my ideas into the music as quickly as possible. For a while I thought I wanted to/should release my program as a product but realized that was way too much like work. Anyway I think it is better to share the ideas and let other people implement them their own way, implementation is part of the creativity.

I have this one in a safe spot:

“I would suggest that if a musician (of any variety at all) is not attempting to break past the walls of consciousness on some level then they have perhaps chosen the wrong medium. That seems to me to be the very definition of music… At the end of the day, if I’m not about exploring something larger than myself with the media at my disposal then I’m merely noodling with a box of battery powered crap. My music would be utter nonsense. Maybe sometimes it is.”

by Campbell Kneale, New Zealand noise artist of Birchville Cat Motel fame, from some interview several years ago. I dunno if he'd mind it being re-quoted here but it gets at the basic point of things I think.