Interview with Jenny Mudarri as told to Matt Kaliner; all Photography by Jaclyn Tyler below and on her site.

Jenny produces music through two different projects: Thrifty and Feral Jenny, and was also a member of the Bent Shapes. 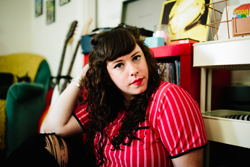 I write and record lo-fi music out of my bedroom in Somerville. Working in a non-professional environment where the stakes are super low lets me be as creative as possible with no pressure or restraints, which I think is the most fun way to work. I record all of my music directly onto my laptop using MIDI microphones, keyboards, guitar adapters, and more. The recording and editing process is my favorite part – there’s nothing better than taking a page full of notes home with you and sitting down to work on a track.

In December of last year, I put out a 6 track EP called Adulting under the name Thrifty, which is my latest solo project. Prior to that, everything I’ve created has been associated with the name Feral Jenny. I started making and recording music in my bedroom back in 2012 as Feral Jenny, and the name sort of stuck over the years. In 2014, that project actually came to life in the form of a three-piece band. We played together for about year, but then dissolved when one of our bandmates moved across the country. I’ll definitely make more music as Feral Jenny in the future, but for now I like having the mental freedom to make whatever I want, in whatever style under the name Thrifty!

I’m still trying to figure out what I’d like to explore next musically, but I’m itching to get started on something new. With the Adulting EP, all of the songs were created beat-first with no particular melody in mind. Before writing any music or lyrics I’d just mess around with very simple beats on my laptop – I wanted to figure out how to make drum sounds without actual drums. I’ve found that for me it’s easier to be creative when there’s at least one control factor in place, so for my next album I’d like to focus more on my vocals and see how far I can push my voice. Stay tuned! 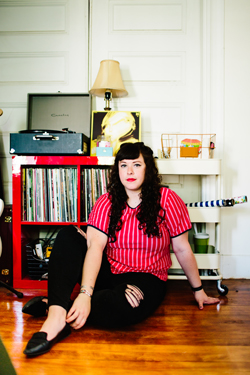 I’ve always been super into music – going to concerts, being in bands, working at record stores and radio stations, etc. etc. – so I think it just makes sense that one day I decided to give a go for myself. I’ve also had really supportive, talented friends over the years who have inspired me with their own music and have encouraged me to keep doing what I’m doing.

I always like having a creative project to focus on outside of work, whether it’s art or music related. I’m also a really goal-oriented person, so I’ll start out with a specific objective in mind, like writing and recording six songs in three months, and being able to actually follow through on that promise to myself that feels so good. It’s incredibly rewarding to make something out of nothing all by yourself – that feeling never gets old.

Thoughts on the local Somerville, or Boston-area creative scene?

I went to college in Burlington, VT, which is when I started to get more involved in the local music scene, and when I came back to Boston (my hometown) I was overwhelmed by how many shows were happening all the time. In Burlington, if there was a show happening that week, everyone you knew showed up. I loved that sense of community, so when I saw how widespread the music scene was here it was both awesome and intimidating. More often than not, I'm going out to see my friends and favorite local bands play, not necessarily touring acts that come through town. There's definitely something really exciting and special about having no shortage of shows to go to across Somerville, Cambridge, Boston, and beyond.