Interview with Judelande as told to Bill House. 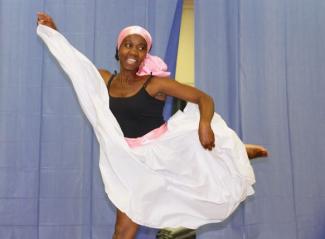 I knew that Massachusetts is a beautiful state; before I moved from my beloved country Haiti, I visited many places in Boston-area, such as Mattapan, East Boston, and Cambridge, until I settled in my favorite place called Somerville.

What do you call the dance that you do?

I am a dancer specializing in Haitian folklore. I dance, Yanvalou, Rara, Mayi, Ibo, and Congo. These are just a few of the 21 distinct rhythms from Haiti.

When and where did you learn this kind of dance?

I began dancing in church as a seven year old. In high school, I was asked to teach what I had learned to young children. At 15, I was taken aside by my group's choreographer to receive more training, and began attending courses at the Viviane Gauthier Company, supported financially by generous community members.

Have you always wanted to be a dancer?

I always love to dance I chose to volunteer teaching children dance in my neighborhood. The only thing I would like to gain from time volunteering is fun! In 2012, I began volunteering for Haitian adult daycare programs such as Cay Pam, Village LA Joie, Sante belle Vie, in Mattapan, West Roxbury, and Dorchester, respectively.

What inspires you to dance?

What should audiences take away, interpretation or a message you wish to convey? Dance is my diary; it allows me to tell a story of my life whether sad, happy or mad. I dance to relieve stress and get out my emotions and pain through movement and the music. I could not stop dancing because the audience shows me love and appreciation.

What is your goal for the dance performances you have organized featuring multicultural performances?

My goal is to promote appreciation for Haitian culture and for those with Haitian roots, and to provide a continuing sense of connection to traditional dance.  Since I moved to the United States, I thought it would be great to start finding ways to be helpful and supportive within my community.  Since 2015, I have both taught and performed Haitian folklore dance, and have produced and presented multicultural performances involving dancers from a variety of immigrant communities.

How has your dance and performance developed during your career and been impacted by the local community?

In April 2019, I received a scholarship from NIFA. I enjoyed the scholarship with my mentor during the summer 2019. I love to dance! I am looking forward to teaching and performing more beautiful pieces of Haitian folklore.

I organized four events per year. First, in January, celebrating Haitian Independence Day. Second, Haitian Flag Day May 18, with the “City of Somerville”. Third, a cultural event at the beginning of July. Also, during winter time, I organize a multicultural event which is the last event for the year. I am now looking forward to preparing for the next event this winter 2019. My longstanding goal is to promote the Haitian culture, rooted in its dance, music and clothing.