You have a long and lively engagement with the Somerville community. What brought you to Somerville in the first place? 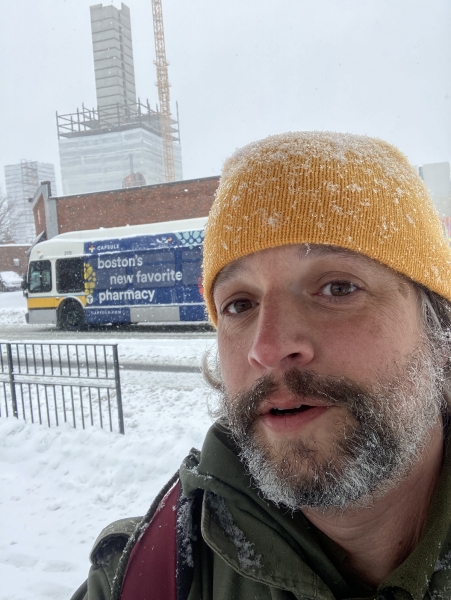 How long have you lived here?
I moved to Somerville in the late 90s. Like most people who moved here at the time, I was drawn to the cheap living and funky culture. I lived abroad in Quincy and Brookline for a few years in the mid-00s but moved back because I missed being around so many weirdos.

Your projects span categories of conceptual art, art interventions, and public art (to mention a few) and seem to come from deeply personal inquiry and yet are collaborative by nature. Perhaps you can tell us about your creative process.
Oh, thanks! I guess I work with themes, and then decide the best way to present them—given the materials and space I have access to and how much free time I have. I’m mainly interested in communicating with people (as opposed to only creating things to expressing myself), so I always want to make sure I package things in a way to reaches other humans.

One of my favorite methods is making posters. They’re cheap and easy to make, easy to stick up around town—and you reach a ton of eyeballs. Of course, the format limits what kinds of ideas you can broadcast.

Lately, I’ve been making a lot of standalone publications, and putting them out under the name of “Free the Future Press.” I think publications are a great way to reach a lot of people—you make these things, and they go places you’d never imagine. You can also pack a lot of ideas into them.

One series of zines is “Mapping Out Utopia,” which looks at the Boston area’s 70s counterculture—amazing stuff like feminist groups, radical environmentalists, cooperative businesses. My zines include overviews of these orgs, and maps of where they were located. I 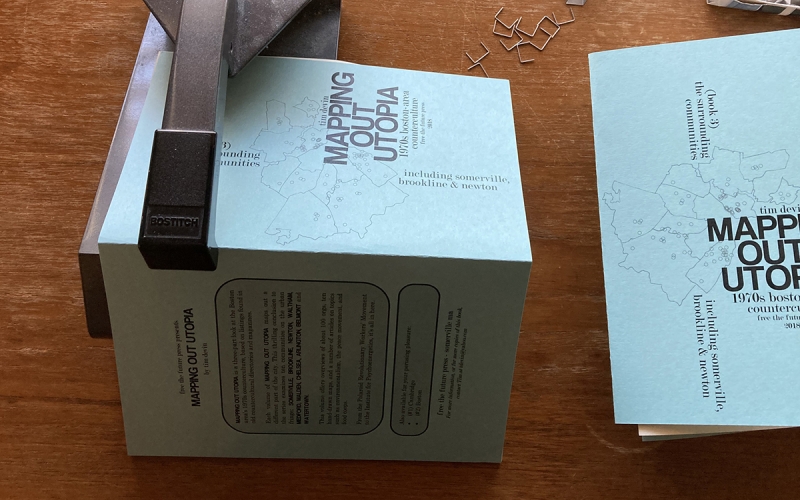 found the material inspiring and thought others might as well—we’re living in pretty dark times. I also lead a series of walking tours (which were co-led by members of the 70s orgs); this was a nice way to reach a different audience, and encourage conversations.

For a while, I was making elaborate community art projects that took the form of events, discussions, and publications. That format let me incorporate a lot of other people’s voices, and start a dialog about something that was important to me. Example: “The history of Somerville, 2010-2100,” which gathered people’s concerns and hopes about the future, and put them in the context of official government plans—and presented it all as a history of the future.
I worked with the Somerville Arts Council and some other orgs to get table space at events, and the Nave Gallery was nice enough to let me mount the results as a show; this let me reach a big chunk of the population. I wanted the ideas to live on afterwards, so I put it out as a print-on-demand book.

You curate a 'zine collection at the Somerville Public Library. How would you define a zine? Can you tell us about the collection – its history, what interests you, and how you decide what to include in the collection?
Sure, zines are handmade, low-print-run booklets that usually have a non-mainstream lean to them. I should mention that the collection I 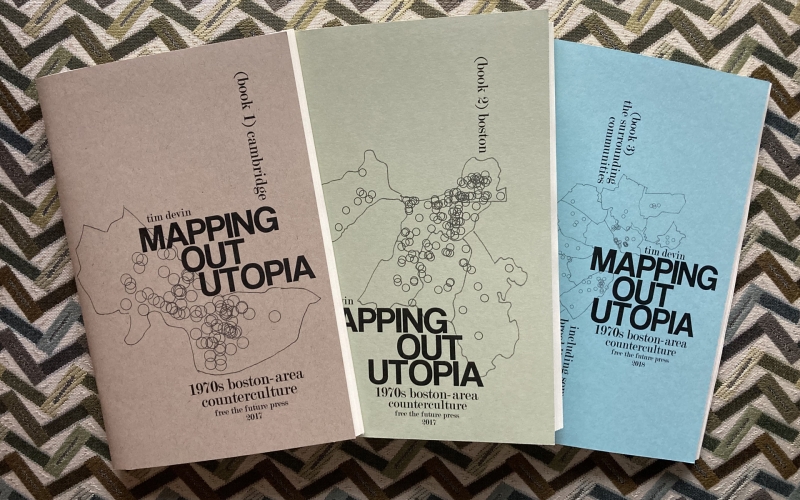 manage contains both zines, and small press works (think poetry chapbooks, comic books, and small magazines). The collection’s focus is on locally-made publications, although it also collects items from around the country.

The Boston area has a rich history of small press and zine publishing—and here we are, in the midst of a renaissance. So it’s great to be able to preserve and showcase all of this creativity—and create a space where creators and readers alike can see what’s out there, since many of these publications are a bit hard to find.

The collection is located on the second floor of the main library, at 79 Highland Ave.

How does your creative life as an artist inform and intersect with your work as a librarian, and vice versa?
Oh, I suppose the common thread is research, as well as an interest in sharing, and in supporting community. Trying to make the world a little better.

Many of your projects share a few overarching threads – connection, information, and community. Where did your inclination toward those types of concerns originate?
Well, I think that a sense of community makes life better for everyone. For that to work, people need to feel conne 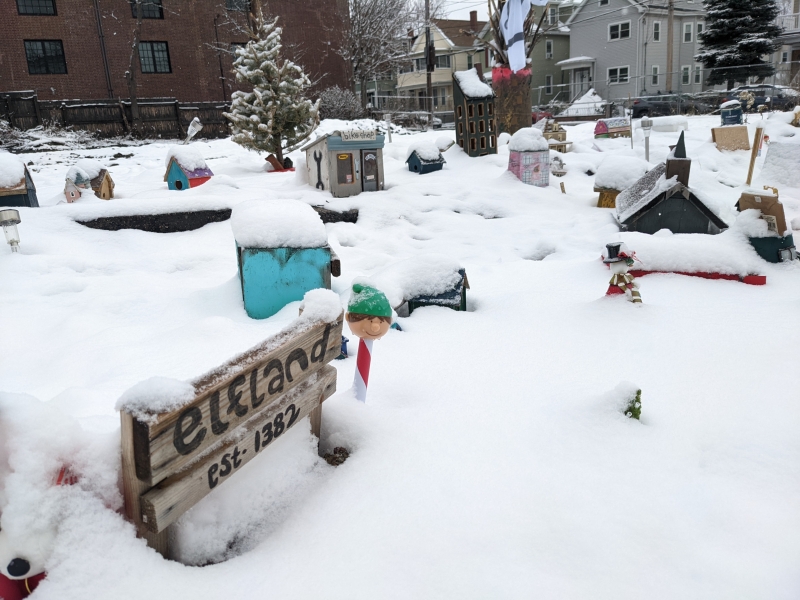 cted. I also think people should have a say in their communities, and for that to work, they need access to information. So it’s all sort of related…

What is your favorite park in Somerville? Some of your favorite places to eat/go out?
Easy! Elfland. It’s a vacant lot that has been turned into a DIY community art project, where locals have been making tiny buildings for the invisible elf inhabitants. It’s at the corner of School and Summer Streets. According to Google Maps, it’s a park, so I think that counts. They have a pretty active Instagram. They’re also lobbying to have the intersection named “Elfland Corner,” and have a petition you can sign here.

In terms of eating, Veggie Crust over on Somerville Ave. makes the most excellent pizza in the world.

Tell us about some of your current projects.
Sure. I have a new poster out on the streets this month, which features my deep hatred of my phone—a.k.a. this greedy little thing that 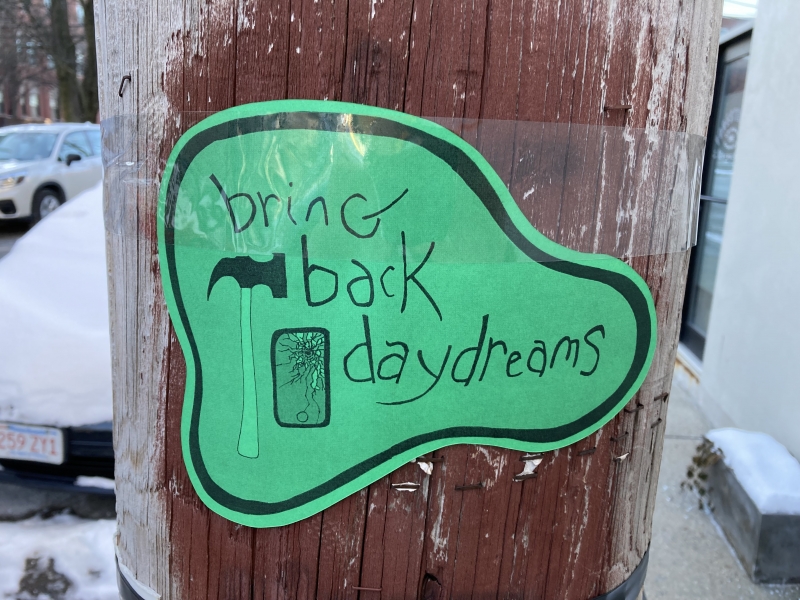 always seems to be buzzing and wanting my attention. Unlike my other posters, this new one is irregularly-shaped, and I like that concept. I think I’m going to run with that in the future.

I have a relatively-new 'zine series, called “Magical Spaces,” that celebrates underground cultural spaces in the Boston area. The first one was a guest-spot (written by Chris Strunk) that covered illegal punk venues. I wrote the second issue; it’s about a small storefront in Cambridge that was home to a long list of artists and radical political types. The idea is to call attention to how important physical space is for cultural experimentation—and to bring up the idea of what we miss out on when our city becomes so expensive.

Last up: I have a few publications in a fantastic show in Barcelona’s Museum of Contemporary Art (MACBA) right now—it’s up through the end of May 2022. I’m pretty excited about that. And excerpts from my “Mapping Out Utopia” zines were included in the new issue of a literary journal called “A Public Space”—which is fantastic. Grab a copy!

Which artists, writers, and/or musicians have most inspired you? What are you reading/listening to lately? 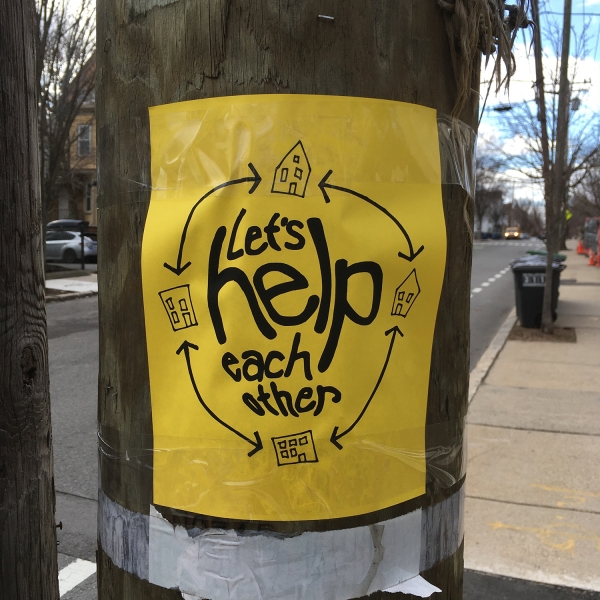 Jeepers, who to choose? Ok, here’s a few.

I really like the Futurefarmers. They’re a California art collective that do these really engaging, playful projects that explore humanity’s impact on the environment. I like how they broach really uncomfortable topics in an engaging way. That’s pretty hard to do, and I find it inspiring.

Cometbus is another inspiration. He’s a long-time zinester who does subcultural reporting in a down-to-earth, personal way—all the while investigating why people do the things they do, and what they get out of them. Fascinating stuff!

And I’m a huge fan of Marc Fischer and Brett Bloom, who work under various names (Half Letter Press, Temporary Services, and Breakdown Break Down, to name a few). Their work looks at DIY creativity, climate change, and the prison system, and they do it a very approachable way. They also do a lot to support other creative people—if you’re an artist, you’ll appreciate that concept, for sure. I love everything about what they do.

Well…..I think I rambled enough already! Thanks for reading, everybody!