An interview with Meg Birnbaum as told to and edited by Matt Kaliner.  Photography by Lee Kilpatrick

I answer questions for myself in my work. Questions about history, other people’s motivations — my motivations. The arts are a great way to learn more about the world. I try to keep growing and I try to face my fears. I feel that I missed a lot of things when I was younger by being fearful of putting myself out in public. Photography and the photo community have opened up so many new opportunities and connections for me and I am catching up. Photography workshops and portfolio reviews in other locations help to inspire and connect me to new people. Being in exhibitions in other parts of the world create opportunities for travel. Teaching and being a part of other people’s creative process is such an honor and it is quite fascinating. It is a wonderful supportive community. 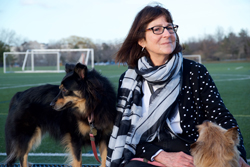 ‘The farm project’ – an art project detailing a year in the life of small farms in and around Concord, MA.  The Umbrella Arts and Musketaquid in Concord sponsored a program that matched me with Pete and Jen’s Backyard Birds. They raised pigs, chickens, turkeys, and rabbits.  Early in the project, Pete and Jen were unexpectedly told they were losing the leased land they had farmed for six years.  It’s common practice for young farmers to get started by leasing available land from other farmers. So, the project changed from how I pictured it in my head and instead I happily spent more time with the animals than the people.

The Sisters of Perpetual Indulgence – The sisters call themselves the “the sacred clowns of our community, taking a stand on the edge of what our society defines as ‘normal’.”  In the current political climate, I feel that what they do is really important.  They raise money for the LGBTQ communities, and fight for social justice using drag and religious imagery to call attention to different gender-based intolerances. And they have a lot of fun doing it. After the election was the first time I’ve heard grown men confidently out of the closet say they were scared. We are so lucky to be living in the Boston area.  I have been going to their events and photographing them in and out of ‘costume’ for 6 years. I have learned a lot about being in the world from them. Although I don’t have a set date, I’m going to show the work in the Stonewall Museum and Archive in Fort Lauderdale, FL. in 2018. 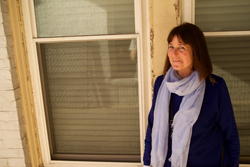 The person/persona project, was about the empowerment of wearing costumes and communities of people passionate about performing. I was hoping to get a better understanding of what allows some people to perform in public while others can’t utter a word in front of an audience.

While working on that project I came across Spirit magazine and discovered a picture of the Sisters and I approached them for this project.  I was very nervous at first – all those men in outrageous dresses and white face – but I wanted to understand what they are doing. One photo and I was off on a new project! There are 4,500+ members worldwide – this is the Boston chapter.

I’m stuck in my head still on the next project. Too many overly ambitious ideas. So how to tell the story and how to pare down the concept –I have not worked these things out yet. I’m interested in simple (ha!) topics like gender politics, Greek mythology, identity and my observations on impermanence and on the things we lose over time.

My older sister. I don’t remember how it came to be but we had an enlarger, and my mom allowed us to use a bathroom in the attic as a darkroom.  We were up there as often as possible. I was 11 or 12 years old. The darkroom is really the magic.

There were many years after art school where I was a magazine designer – often 7 days a week – and there was not much time to create art although I was painting when possible. I picked up my camera again in 2001, and thought I would have a great summer not realizing everything would change on 9/11.  I unexpectedly had time to devour photography books, I found that there was a huge world beyond Ansel Adams and anything was possible. I played with numerous alternative processes. I fell in love with plastic ‘toy’ cameras. I fell in love with all things photo based.

It makes me feel alive.  I love having purpose – having a project.  Each project has introduced me to new people and places. I never imagined I could show work in other countries and travel to places like Japan and China.

I teach a class at the Griffin Museum of Photography in Winchester called The Photography Atelier.  A lot of people have amazing single photos but don’t know how to make a body of work out of it.  A lot of the class is built around peer critique – learning to talk about your own work and other people’s work.  What to do with your work after the class ends.  I love being a part of other people’s creative journey.

I love that Somerville is so open to so many kinds of fun festivals.  There’s a lot of artistic energy around and it’s easy to meet artists.  I’m in love with the idea of The Curated Fridge. Every other month there is a call for entry with great jurors and then there is an exhibition on – you guessed it – a Somerville refrigerator. This was the brainchild of photographer Yorgos Efthymiadis. I just love that it happens.

I’m very intrigued by this maker, do it yourself generation, the ArtFarm, the Artisan Asylum – it’s an interesting generation and has already had a huge impact on the city.  The fix it - re-use it -the sharing, sensibility – it’s just wonderful.