Interview by Gilmore Tamny.  Photos by Jaclyn Tyler Poeschl and check out Jaclyn's blog post of her photo session of Catherine. 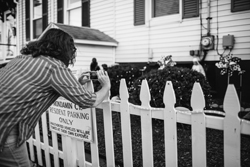 Tell us a bit about your project and how it evolved.

As an attempt to keep active after a foot injury kept me from running, I began walking on my lunch hours. I created a loop using a handful of side streets that began at City Hall and got me to the bike path in Davis Square. If I walked Albion Street to get me to Davis, I usually chose Hudson Street to get me back to work. Walking this route repeatedly, I began noticing the shrines, and eventually I took a photo of a bathtub shrine on Albion Street, which is sadly no longer there, and that became my first photo for the project.

How can our readers find your work? Either online or in a public space?

The Tumblr page for the project is the best way to view the entire project: http://bathtubmarysofsomerville.tumblr.com. If you're on Facebook, you can like the Bathtub Marys of Somerville page and scroll through ones I've posted: https://www.facebook.com/BathtubMarysOfSomerville/.

Who are some of your favorite photographers? Artists? Did they influence your project at all?

My husband and I enjoy documentaries and saw Finding Vivian Maier in the theater, and it really left an impression on me. Maier lived most of her adult life as a nanny, and with the exception of the families she worked for, who didn't really know all that much about her, she lived reclusively. Around the time of her death someone unearthed thousands of negatives of stunningly candid street photography she had taken over the decades, mostly of Chicago, and self-portraits. Apparently no one knew about her photography when she was alive, and so what she left behind seems like such a grand parting gift for someone so private: snapshots of moments that change and are forgotten about in the blink of an eye preserved so that we can linger on them just a little longer and give some thought as to what they're all about.

Have you any urge to turn this into a video/film documentary piece?

My great friend, and fellow Somervillian, Ann Adelsberger, created a short documentary about the Bathtub Mary Project in 2013, which you can see here. We have talked about extending it, hoping to interview folks who have shrines so they can share their stories about life in Somerville and what their shines means to them.

How systematic was your approach to documenting and/or finding as many as you could? Did you keep a log or map? Get hot tips?

After I exhausted my initial loop, I decided to pick a new route every day. The folks at the Election Department gave me a large street map of the city and after each trip I would highlight all the streets I covered. Because I work at the Central Library on Highland Ave., all my walks would start from there and I was able to reach neighborhoods in Magoon Square, Union Square, Ten Hills, and East Somerville. Eventually I needed to drive to a new beginning point and start walking from there, which is how I covered West Somerville during my lunch hour. But I also spent many hours on the weekends walking from where I live, and also enlisted some friends for extra walks during the week. I think it took me about 7 months to walk every street in Somerville, and I did the bulk of it in the winter, so I needed a lot of layers!

Was there any particular patterns you noticed in those that selected Virign Mary vs. St. Francis, etc. to be part of their home? By street? By decade?

The only time I recall anything close to a pattern were three houses on Concord Ave. that were very close to each other and had a bathtub deep in the back of each driveway, so I presume they were all erected around the same time and imagine they were pretty friendly neighbors, if not relatives. 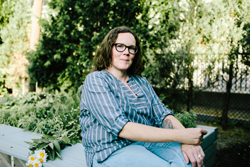 I couldn't help but think of C.G. Jung or Joseph Campbell might say about your work. Are you familiar with them? Does this resonate at all with you?

I think what resonates more is the response George Mallory provided when asked why he wanted to climb Mt. Everest. Though the project seems to have afforded people an opportunity to reflect on spirituality and religion, and superstitions, for me it was really more about connecting to the city I was born and raised in. It gave me a reason to walk down every street in the city, and and reconnect with certain times in my life, whether as a child or a young adult. Sometimes I'd walk around a neighborhood that felt like little had changed over the years and that seemed liked finding some hidden treasure. Of course, the more shrines I found, the more I reflected on them, but it was more about how they could evoke certain feelings depending on the time of day, weather, or season, and my mood.

Would you ever be interested in doing this sort of project in another state or country, where they too have such religious statuary/shrines outside their house? With another religious tradition?

Definitely not! That said, I wish folks who live in Medford, Revere, and East Boston would take up the project, not only because I'd love to know how many they could locate, but because as works of folk art they're lovely to look at, and representative of a tradition that I think is dwindling over time.

How conscious were you of the manner in which you photographed--light, technique, time of day, etc.? (note: I know very very little about photography!).

With apologies to any photographers who might read this, I know absolutely nothing about photography. This project was the result of having two things at my fingertips: an iPhone and Instagram. But I do think I learned something about framing and, at least to me, capturing or creating some tone that matched how I felt about them. 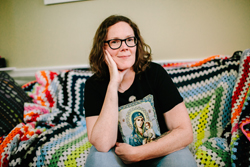 Have you come to notice other sorts of statuary at people's houses and does any of it seem religious, if secular or more animistic?

What I've noticed is that folks really like to use indoor furniture on their porches. I found several homes w/ recliners or sofas of various fabrics, including velvet. That could be a good second project. Someone should get on it. :)

I have wondered what happens to them (as my impression is they are on the wane)  as homeowners change. It strikes me as they should almost be deconsecrated. Have you heard anything about this?

Several shrines I found in 2012 are gone. I can only imagine how many more I would have found had I thought to do this 20 years ago. I agree that they are on the wane. As our population increases, and more multi-family homes are converted into condos, and as new residential development seems to lean towards fitting the maximum number of people the square footage can accommodate, there are less opportunities for creative personal expression, especially of a religious nature. Personally, it's bittersweet. On the one hand, I'd love it if there was a way to preserve the shrines that have endured as long as they have, but our population is diverse, and encompasses many religions, and if we're all living side-by-side, or one of top of the other, the challenge becomes finding ways to be expressive but also mindful and respective of your neighbors.

This is a bit of a stretch, have you heard any sort of urban myths, ghost stories, folk tales or curative powers around any of these shrines?

Do you feel like an anthropologist in any way?

I feel more like a curious person who values the experiences and creativeness of other people who love Somerville as much as I do.

Do the size and manner of display ever seem to be intended to signal affluence at all?

I've seen one or two shrines that are epic in size, to the point where they outshine the home they exist beside. I can't speak to whether or not that's a sign of affluence, but I feel pretty comfortable believing there is a huge connection between the of honor and pride of homeownership and the honor and pride derived from one's cultural and religious heritages.

Have you ever heard of conflict surrounding the displays (neighbor spats, etc.).

I have not, thankfully!

Which is/are your most favorite ones?

I can fall in love with all of them, really. It's impossible to pick just one, but the one I always hold in my heart is a bathtub shrine with a statue of Mary on North Street. The tub is painted blue, like Mary's robe, and at the bottom of the shrine it's engraved: MPB 1975, with blue paint chips around it.